Inflation rose by 0.2% in the year to May, according to latest figures from the Central Statistics Office, down from a four year high of 0.9% in April.

Meanwhile, between April and May inflation fell by 0.2%, the first monthly drop in consumer prices since January.

Petrol and diesel price rises have contributed to the increase in transport costs, as well as higher air fares. 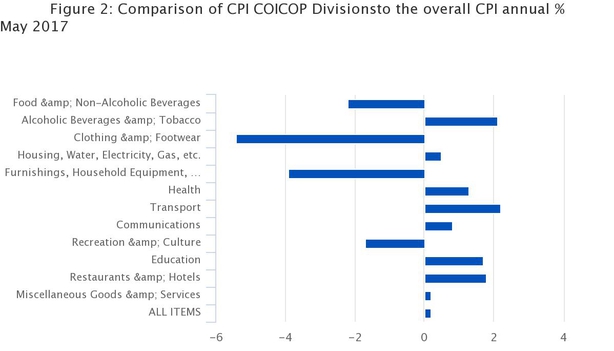 According to the CSO figures, the most notable price drops were in the areas of clothing & footwear (-5.4%), furnishings & household maintenance (-3.9%), and food & non-alcoholic beverages (-2.2%).

The considerable drop in clothing & footwear costs is attributed to more sales.

Across the European Union, for the year to May, consumer prices remained unchanged, while there was a monthly drop in inflation of 0.2%.

Commenting on the figures, Economist Alan McQuaid from Merrion Capital said: "Despite strong Irish economic growth, there is little sign of sustained pressure on the prices front, which appears to be the same story across the euro zone, suggesting that the European Central Bank will be in no hurry to tighten monetary policy.

"Inflationary pressures in Ireland as measured by the headline consumer price index should in our view remain fairly-well contained in the immediate future.

"That said, the cost of services like insurance and education are likely to remain elevated," he added.