Investec economist Philip O'Sullivan has said that the Brexit vote is "unambiguously negative for the Irish economy".

The economist said that with a sixth of total Irish exports and more than 40% of exports from indigenous firms going to the country's nearest neighbour, Ireland was a far from disinterested observer of this process.

"This is a real headwind for Irish exporters," he stated.

The economist noted that the ESRI had previously forecast a possible adverse hit to Irish GDP over two years in the event of Brexit due to a combination of a weak pound and wider spill-over effects in the global economic environment.

He said it was difficult to forecast the longer-term impact on the Irish economy from a Brexit, as this is highly contingent on the trade arrangements struck between the UK and the rump-EU.

"But for what it's worth the range of estimates suggest that Irish per-capita GDP could be between 0.8% and 2.7% lower by 2030 than would have been the case under a 'Stay' outcome," he added.

"On balance, we do not think Brexit will be sufficient to push Ireland into recession, but it could push Irish GDP growth down by 1-2% in 2016/17," he said.

The danger is, however, that Brexit precipitates a broader European slowdown, or a hasty EU exit period that puts the UK's single market access at risk, he added.

Employers group Ibec has said the UK vote to leave is a very significant blow to the EU, which will lead to a potentially protracted and unwelcome period of uncertainty and instability in Europe. 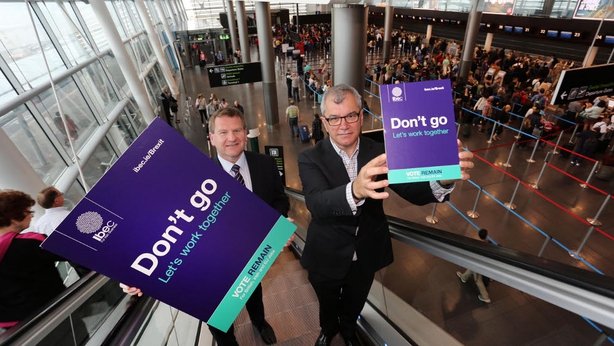 In a statement, Ibec said the Government, EU institutions and central banks must to do all within their power and remit to minimise financial, economic and political instability.

"The task then is to ensure Irish interests are safeguarded in British EU exit negotiations. Ireland must be centrally involved in these negotiations," it added.

Ibec's CEO Danny McCoy pointed out that Ireland will be impacted more than other countries by the UK's decision to leave the European Union.

"It is vital we play a central role in exit negotiations. Our unique economic concerns need to be heard and fully understood, and our interests fully safeguarded in any final agreement," he stated.

"It is important that acrimony quickly gives way to pragmatism and that a speedy, mutually beneficially arrangement between the EU and UK is reached", he added.

Mr McCoy said the range of competing interests and concerns make this a difficult task. "It is vital that these challenges are overcome and Ireland can play an important role.

Meanwhile, the Small Firms Association has said that small Irish firms will feel the impact of the Brexit vote most severely, as they do not have the same degree of mobility or diversification as larger companies.

The SFA's Patricia Callan said that for many Irish small businesses, the UK is their first and often their only export market.

Ms Callan said that the survival of many businesses is dependent on UK suppliers, investors and customers, so this outcome is particularly worrying for them.

"Uncertainty is never good for business and the Leave vote has ushered in a long period of uncertainty as the detailed arrangements for the UK's exit are worked out over the coming months and years," she added.