US Federal Reserve Chair Janet Yellen received medical attention yesterday after struggling to finish a speech in which she said the Fed was on track to raise interest rates for the first time in nearly a decade.

The 69-year-old Fed chief, who had been speaking for nearly an hour before a packed university auditorium, appeared to lose her place in reading the last few lines of her speech.

She abruptly said: "Let me stop there."

As head of the world's most powerful central bank, Yellen plays a major role in the global economy and has been at the centre of speculation over when the Fed would finally raise rates after being at near zero for almost seven years now, a move that would reverberate through financial markets worldwide.

The few moments, in which Yellen appeared to lose her concentration a few times in a speech at the University of Massachusetts came in her first public comments a week after she explained the Fed's decision to delay the much-anticipated policy tightening.

"As a precaution, she was seen by (emergency medical) staff. She felt fine afterwards and has continued with her schedule Thursday evening," Smith added.

A university spokesman said she was attending a dinner event as planned.

For Yellen, it had been a long day at the university that started with a breakfast with graduate students and faculty, according to three people who were there.

Nearing the end of her speech, she began to slow and then lost her place in reading her notes, before pausing for 20 seconds, beginning again and then taking another 25-second break.

The Fed declined to comment on whether Yellen, who has not been known to suffer from any health problems, intended to seek a medical check-up.

Any questions about Yellen's own health could unsettle financial markets that have been volatile about the health of the global economy and the impact of a Fed rate hike, which could rock bond markets and suck capital from emerging markets. 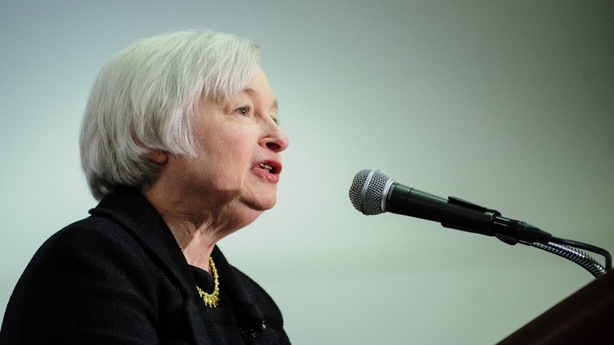 In her speech, Yellen said she expects to begin tightening policy later this year as long as inflation remains stable and the US economy is strong enough to boost employment.

Recent global economic and financial market developments do not significantly affect the Fed's policy, she said.

That message, along with Yellen's contention that recent inflationary weakness is likely transitory, may come as a surprise to some investors who took last week's policy decision by the Fed as a sign that a US policy tightening was no longer imminent and would likely come next year.

Much of the recent price weakness, Yellen said, is due to special factors such as a strong dollar and low oil prices, which are likely to fade, allowing US inflation to rise to a 2% goal over the next few years.

Yellen said that both she and the policy-making Federal OpenMarket Committee expect the world's largest economy to be strong enough to achieve maximum employment and to keep expectations for prices stable.

As it stands, she said, US economic prospects "generally appear solid."

The Fed's decision to hold off raising rates for the first time in nearly a decade was somewhat expected, given a recent selloff in global financial markets that was sparked by fears that China's economy is weaker than expected.

But economists and investors reacted to Yellen's cautious tone last week by complaining of mixed messages and pushing expectations of a rate hike out to March of next year, from December previously, based on futures markets.

Yellen, however, said it was best not to delay "too long" what should be a "quite gradual" pace of future rate hikes.

"The more prudent strategy is to begin tightening in a timely fashion and at a gradual pace, adjusting policy as needed in light of incoming data," she said yesterday.

The Fed has two more chances to tighten this year, with policy meetings set for October and December.

Yellen cautioned that inflation may rise more slowly than anticipated, which would prompt policy adjustments.

But she warned that letting inflation rise too much could lead the Fed to tighten so forcefully it could roil financial markets "and perhaps even inadvertently push the economy into recession."

She also hinted at what would give the Fed assurance that inflation would return to target, clearing the way to a rate hike.

"We need," she said, "to be reasonably confident that we will see continued solid economic growth and further gains in resource utilisation, with longer-term inflation expectations remaining near their pre-recession level".