Ireland's economy accelerated by 1.4% in the first three months of this year and expanded by more than previously thought in 2014, according to the latest Central Statistic Office figures.

Gross Domestic Product grew by 5.2% last year, compared to a previous estimate of 4.8%, making Ireland the fastest growing economy in the European Union, the CSO said in a statement.

GDP grew 1.4% in the first quarter of 2015 compared to the previous three months, the CSO added. Ireland is forecast to be the EU's fastest growing economy again this year.

This week the Central Bank said growth in 2015 would be 4.1%, slightly higher than the forecasted 4% figure. 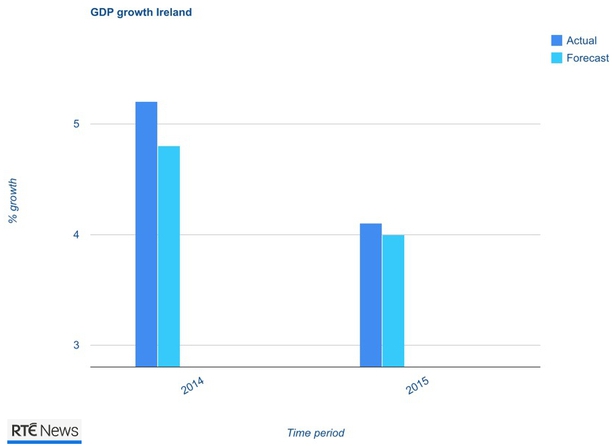 The European Commission expects GDP growth to be only 1.8% in the EU and 1.5% in the euro area overall this year.

The Irish economy is now the same size as it was at its peak in 2007.

Minister for Finance Michael Noonan said "robust growth" was being recorded across most sectors of the economy.

"We have laid the foundations for a solid recovery. The task now is to build upon the gains we have made in recent years," Mr Noonan said.

He added: "We would now say that growth is more likely to be in the 5.6% range and a positive boost for the Government ahead of next year's General Election."