The IMF says the European Central Bank should cut interest rates further, while continuing to use so called "unconventional policies" in an effort to boost growth in the euro area.

It is also calling for the creation of a pan-European agency to take direct stakes in banks, in order to recapitalise the finance sector.

In its latest economic outlook, the body says the euro zone crisis is the main risk to growth in Europe and worldwide.

It further says far reaching changes are needed in the running of the single currency, including risk sharing schemes to make the loss of sovereignty "more palatable".

It predicts the euro area will see negative growth of -0.5% in the first half of this year, with a gradual return to growth in the second half leaving a full year figure of -0.3%. Next year it predicts growth of 0.9%.

For Ireland it says 2012 should see positive growth of 0.5%, with growth of 2% set for 2013 - the third highest level forecast for a euro zone state and double the euro area average.

Global growth is forecast to be 3.5% this year, down from 4% last year due to the effects of the slowdown in the euro economies.

For most economies growth is now forecast to be moderately stronger than that forecast in the January 2012 WEO update from the IMF.

It says that because of the need for most countries (except Germany) to consolidate their budgets, they have little money for conventional economic supports. Because of that monetary policy will have to play more of a role in supporting growth - hence the call for the ECB to cut rates.

It also says the Bank of England can further ease its monetary stance.

Identifying the problems facing most governments in Europe and the euro zone in particular, the IMF says they need "a policy mix that supports the recovery while addressing the fiscal sustainability challenge and financial sector vulnerabilities".

It says countries need to concentrate on structural reforms to boost growth, as growth - or the lack of it - is part of the current sovereign risk crisis.

The IMF recommends further action to tackle the euro zone crisis along two paths. Firstly using the so-called firewalls - official funds such as the EFSF and the new ESM. The IMF says that to limit the damage of rapid deleveraging in the banking sector, banks must raise fresh capital, from governments if necessary.

The IMF says a pan European Agency is needed to take financial stakes in banks "including in countries with little room to do so themselves".

And it suggests that stronger mechanisms are needed to enforce responsible fiscal policies in the Euro area. These would go far beyond the changes in the Fiscal Compact Treaty, and would include some form of "fiscal risk sharing across countries" through the ESM. This would be needed it says "to make the inevitable loss of national policy discretion palatable".

It also called for further progress in integrating the European Financial Sector, including cross border supervision of banks: bank resolution mechanisms to deal with failed banks: and a euro area deposit insurance scheme with a common backstop. 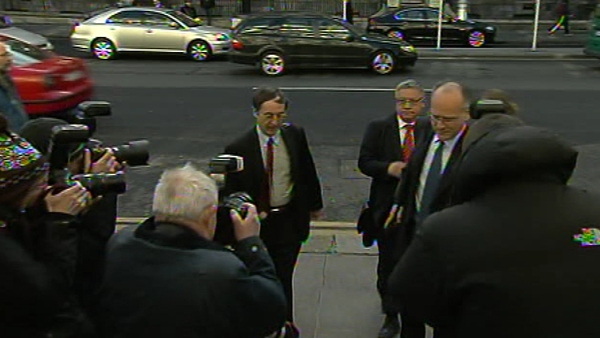