The closely watched interest rate demanded by investors to lend money to Italy for 10 years fell below 6% this afternoon for the first time in six weeks.

Italy's 10-year government bond yield touched 5.99%, down 0.24 points on the day, before moving slightly above 6% this evening.

The fall came after strong debt auctions and a broad improvement in sentiment after the US Federal Reserve last night said it would keep interest rates low for a longer period than expected.

Italy this morning issued €5 billion in medium-term bonds at much lower interest rates.

The Italian treasury had sought to place between €3.75 billion and €5 billion in bonds on sovereign debt markets, the Bank of Italy said. It issued €4.5 billion in zero-coupon bonds due to expire in January 2014 and €500m in inflation-indexed bonds that are to mature in September 2014.

The yield on the zero-coupons dropped sharply to 3.763% from 4.853% at the last similar operation on December 28. The interest rate on the inflation-indexed bonds was 3.2%, but the Bank of Italy gave no comparison with a previous operation.

Italy faces another market test tomorrow when the treasury is to issue €11 billion in short-term bonds, and on Monday, when it hopes to raise up to €8 billion in medium to long-term bonds.

The country is struggling with a colossal debt of €1.9 trillion, around 120% of the country's gross domestic product, and has said it will issue bonds worth almost €450 billion this year. 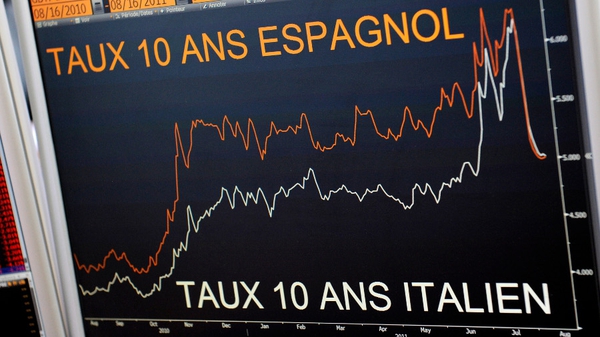