A property developer who was last year ordered by the courts to repay some €300m to NAMA has been declared bankrupt in Britain, insolvency papers showed today.

Ray Grehan, who with brother Danny, developed apartments, hotels and fitness centres before Ireland's property bubble burst in 2008, is the latest casualty of the financial crisis to take advantage of Britain's more lenient bankruptcy laws.

The bankruptcy could complicate a move by the National Asset Management Agency against Grehan in November, when he was ordered to repay €312m.

British bankruptcy proceedings free an applicant from overwhelming debts, subject to restrictions, and share out assets fairly among creditors, according to the UK Insolvency Service.

"Clearly we will review the situation but our focus remains on recovering the maximum debt for the Irish taxpayer," a spokesman for NAMA, now one of the world's biggest property groups, told Reuters.

Grehan, whose brother also owes NAMA some €300m, was declared bankrupt in London on December 30, his last-known address being an apartment in the city's East End, according to papers published on the UK Insolvency Service website.

An applicant who has previously lived abroad can be made bankrupt in the UK if a court deems it to be the country where their "centre of main interests" lie, a term that refers to the location where the applicant runs a business or earns a living.

Séan Quinn, once Ireland's richest man, was made bankrupt under UK law in Belfast last year. However, the declaration is being challenged by The Irish Bank Resolution Corporation (IBRC), formerly Anglo Irish Bank, which says Quinn owes it €2.9 billion and claims his main interests are not in Northern Ireland.

The Grehan brothers paid the highest price ever, per acre, for a Dublin site when they bought the UCD Veterinary College in Ballsbridge. It is currently being used as a car park.

Since NAMA was established, Mr Grehan has a difficult relationship with the agency. In late December NAMA secured a worldwide order freezing his assets and the agency also blocked the sale of luxury apartments owned by Mr Grehan in London and Toronto.

NAMA has also appointed receivers a number of his properties in Ireland and the UK. Among them is the Grange development in Stillorgan, Co Dublin and a Co Meath Hotel.

Today's bankruptcy move in the UK will make little difference to the Grehan properties to which NAMA has already appointed receivers. But if further assets come to light, the agency may have to contest its rights to seize them with other creditors.

"We served papers on Sean Dunne over the Christmas holidays as part of enforcement proceedings to recover debts for the Irish taxpayer," a spokesman for the agency said.

It is understood that NAMA intends to take the action to pursue personal guarantees given by Mr Dunne.

Last year the agency appointed a statutory receiver to a number of properties owned by developer Sean Dunne. Grant Thornton was appointed to act as receiver.

One of the properties included in the receivership was Hume House in Ballsbridge which the developer bought in 2005 for €130m.

In 2010, NAMA acquired land and development loans extended to Mr Dunne by Irish lenders. The former Jury's Doyle Hotel in Ballsbridge was not included in the receivership as it was financed by British-owned Ulster Bank. 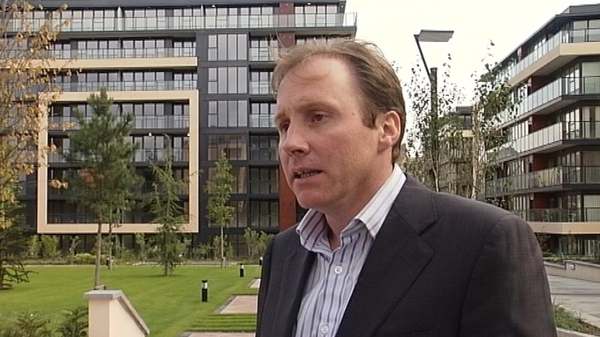