Banks gobbled up nearly €490 billion in three-year cut-price loans from the European Central Bank today, easing immediate fears of a credit crunch but leaving unresolved how much will flow to needy euro zone economies.

Following a string of failed attempts by euro zone leaders to halt market attacks on the euro zone's weaker members, hopes of crisis relief before the end of the year had been pinned on a massive uptake of the ECB's ultra-long and ultra-cheap loans.

The huge take-up of ECB funds represented the most the bank has ever pumped into the financial system and exceeded almost all forecasts. A total of 523 banks borrowed with demand way above the €310 billion expected by traders polled by Reuters.

The ECB funding should bolster banks' finances, ease the threat of a credit crunch and may tempt them to buy Italian and Spanish bonds, thereby easing the currency area's sovereign debt crisis.

But analysts said there was little prospect of the cash being hurled at the debt of euro zone weaklings and, while an interbank lending freeze may have been averted, the lack of trust between banks to lend to each other remains unresolved.

Optimism that the lunge for funding would ease Europe's two-year old debt crisis quickly faded, sending the euro and stock markets lower after an initial jump.

Banks have struggled to attract funding mainly because of worries about the underlying health of euro zone countries and their exposure to it, so becoming more reliant on the ECB and pledging more assets against those loans may add to the problem.

The debt problems of Greece, Portugal, Ireland and now Italy and Spain have taken the euro zone's troubles to new heights in recent months and raised serious questions about whether the euro, the currency shared by the 17 euro zone countries, can survive in its current form.

While a lending crunch may have been avoided thanks to the ECB's latest move, it is much less certain that banks will use the money to buy Italian and Spanish government debt, as French President Nicolas Sarkozy has urged, given the competing pressures on them to cut risk, rebuild capital and lend to business.

Banks will not increase their exposure to sovereign debt because European Bank Authority (EBA) rules discourage it, Italy's banking association (ABI) said. "The EBA rules are a deterrent for buying sovereign bonds, so not even the ECB's important liquidity injection can be used to support sovereign debt," ABI director general Giovanni Sabatini said.

Given those doubts, most market experts say only more aggressive and direct buying of government bonds by the ECB will help ameliorate the crisis, something it is reluctant to do.

Italy alone faces about €150 billion of debt refinancing between April and March and data today showed its economy - the euro zone's third largest - shrank in the third quarter, while the ABI forecast a recession next year.

Italian banks tapped the ECB for more than €110 billion, an Italian banking source told Reuters while a source from a Spanish bank said nearly all Spanish banks had participated in the three-year ECB auction and taken up between €50-100 billion.

One of the key factors certain to have boosted demand is that banks are now more reliant than ever on central bank funds. The ECB said on Monday, in its semi-annual Financial Stability Review, that this dependency could be difficult to cure.

French banks have almost quadrupled their intake of ECB money since June to €150 billion, while banks in Italy and Spain are each taking more than €100 billion.

ECB President Mario Draghi had been pressing banks to take the money since announcing the plans earlier this month. He warned of a chance of a credit crunch on Monday and said that euro zone bond market pressure could rise to unprecedented levels early next year.

The three-year funds were offered at an interest rate which will be the average of ECB's main interest rate over the next three years. That benchmark rate is, after a rate cut earlier this month, at a record low of 1%. For some banks the new money could be more than 3 percentage points cheaper than they can get on the open market.

As part of the deal, banks were able to convert one-year loans they took from the ECB in October into the new three-year loans and also will be able to pay it back after just a year if they so wish.

The ECB was already lending banks €515 billion before today but the new loans will not simply stack on top. Banks switched €45.7 billion out of the one-year loans they took in October. They also scaled down their three-month borrowing from the ECB to €30 billion from €140 billion and almost halved their intake of one-week loans this week.

Analysts at Royal Bank of Scotland said the actual amount of new money going in to the system as a result of that juggling reduced the headline number to around €200 billion. 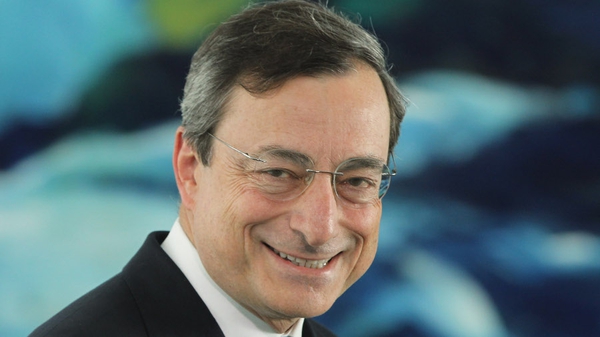