The Government has been outlining which infrastructural projects will be affected by a decision to cut €750m from capital spending next year.

Priority will be given to school, healthcare and job creation projects. Projects which will be deferred include Metro North to Dublin Airport, Dublin's DART underground, the prison at Thornton Hall and the Grangegorman DIT single campus project.

The so-called BXD project to link the two Dublin Luas lines and extend the service to Broombridge will proceed, however.

Some of the health funding will also be allocated to enhanced primary care centres.

In education, 70,000 additional students are expected to enter primary and second-level education over the next five years. Funding will be made available for 20 new primary and 20 new second-level schools, as well as extensions and refurbishment for a further 180 existing schools.

The agriculture sector will receive supports totalling €800m over the next five years, while €1.6 billion will be invested by 2016 in water services.

Transport capital spending to be halved

Transport Minister Leo Varadkar said overall spending on transport infrastructure would fall by almost 50% from €1.5 billion this year to €800m in 2016.

He said the Government hopes to finalise funding for the N11 Rathnew/Newlands Cross project in the coming year. But the National Roads Authority has been asked to withdraw the M20 Cork-Limerick project from An Bord Pleanála.

Minister Varadkar said work on Luas BXD would start in 2015, with completion scheduled for 2018. He said the priority would be renewal of the existing bus and rail fleets.

The capital allocation for enterprise and job creation initiatives will increase by €6m next year to €514m - but will fall dramatically to €458m in 2013.

Minister for Jobs, Enterprise & Innovation Richard Bruton said the fall would be compensated for by the fact that income generated by agencies such as Enterprise Ireland could be ploughed back into job creation, rather than being returned to the Exchequer at the end of each year.

He said that, in that context, he was confident that the overall budget in 2013 would remain at or within 5% of its 2012 levels.

There will be a 4% increase in the Enterprise Ireland capital budget next year, and the IDA capital budget will be fully protected. Minister Bruton said he would be presenting a new jobs strategy early in the new year.

He will also be bringing proposals for a Temporary Partial Loan Guarantee scheme to cabinet shortly and hopes it will be up and running to assist business by the end of March 2012.

NPRF to back new infrastructure fund

The National Pensions Reserve Fund is to put €250m into a new fund to invest in Irish infrastructure.

An NPRF statement said the Irish Infrastructure Trust would will seek to invest in assets earmarked for disposal by the Government, commercial State enterprises and new infrastructure projects.

The new fund has been established by Irish Life Investment Managers (ILIM). ILIM said that it would seek up to €1 billion from institutional investors in Ireland and overseas. It has already received cornerstone investment commitments of €300m from institutional funds, including €250m from the NPRF.

Global infrastructure manager AMP Capital has been appointed as the fund’s investment manager.

ILIM chief executive Gerry Keenan said the fund expected "considerable investment opportunities" to emerge in the coming years with infrastructure
assets which have traditionally been closed off from outside investment.

Public Expenditure & Reform Minister Brendan Howlin said the Government could not afford to do all that it wanted to do. He said today's report was about priorities, adding that the significant improvements in infrastructure in recent years had reduced pressure on the Exchequer.

He said the Government would have struggled to fund the new children's hospital without the decision to use money from a new National Lottery licence.

Minister Howlin said some of the large-scale transport projects previously proposed were not affordable at the moment. "It is our job to ensure that our public finances can be restored to allow these projects emerge in the not too distant future," he said.

Minister Howlin also said his department was open to proposals from private sources, including pension funds, to fund infrastructure projects.

Calls to use pension funds for investment

Employers' group IBEC said the Government must maintain its ambition for the economy by seeking to raise an extra €2 billion per year through non-Exchequer sources.

"The Irish economy has growth potential of twice the EU average and despite current pressures we need to plan for this," said director general Danny McCoy.

The Construction Industry Federation accused the Government of trying to "create an illusion" that there was an ambitious long-term public capital programme in place. The CIF said infrastructure investment was being decimated through cutbacks of €1.3 billion over the next two years.

CIF director general Tom Parlon said the plan "lacks credibility given the absence of detail in respect of the capital projects pipeline".

The Irish Congress of Trade Unions said key projects such as Metro North, the Grangegorman DIT campus and DART Underground could be saved by attracting investment from some of the €75 billion currently held in Irish private pension funds.

Speaking at a seminar on pensions, ICTU officer Fergus Whelan said that while the cut in capital spending was bad news for jobs and growth, pension funds could be persuaded to invest instead.

“All that is required is the creation of an appropriate risk-sharing investment vehicle that would attract a small portion of the €75 billion of Irish workers’ pension money that is currently invested internationally and stimulating economic growth and job creation everywhere but here,” Mr Whelan said. 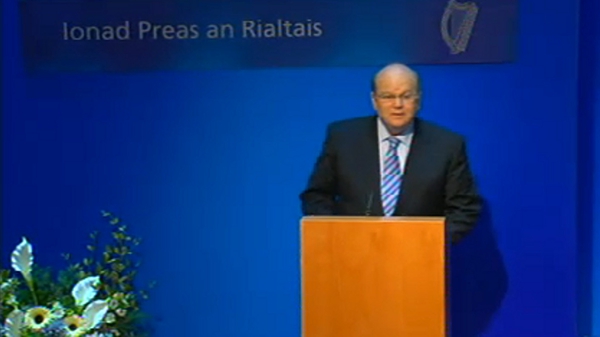