Apple's net profit in the recently-ended quarter soared with booming iPad sales but its stock sank last night on the eve of a workplace tribute to Steve Jobs due to missed iPhone expectations.

The California company reported record-high September quarter profit of $6.62 billion on revenue of $28.27 billion boosted by iPad sales that nearly tripled to 11.12 million compared to the same time last year.

The enviable earnings, however, did not measure up to expectations Wall Street had set for Apple and the company stock price slid more than 6% in after-hours trading.

"We are thrilled with the very strong finish of an outstanding fiscal 2011, growing annual revenue to $108 billion and growing earnings to $26 billion," said Apple chief executive Tim Cook.

"Customer response to iPhone 4S has been fantastic, we have strong momentum going into the holiday season, and we remain really enthusiastic about our product pipeline,'' he added.

The company saw iPhone sales rise to 17.07 million and Macintosh computer sales climb to 4.89 million in 26% and 21% increases, respectively, from the third fiscal quarter in 2010.

But analysts had expected iPhone sales to be stronger. They said it was the second miss for Apple when it came to managing market expectations.

Cook unveiled the new iPhone 4S on October 4, one day before visionary Apple co-founder Jobs died following a long battle with cancer. His health failing, Jobs, had stepped down as chief executive in August and was replaced by Cook.

Apple executives, downplayed the break in iPhone sales momentum, saying rumours buzzing before the launch last week of the iPhone 4S caused people to wait to snap up the latest model.

"I am confident we will set an all-time record for iPhone this quarter," Cook said during an earnings conference call. "In our wildest dreams we couldn't have gotten off to as good a start as we did with the 4S," he added.

Apple has sold more than four million iPhone 4S smartphones since it was released Friday in seven countries: the US, Australia, Canada, France, Germany, Japan and Britain. It will be available in 22 other countries, including much of Europe, by the end of October, and more than 70 countries by the end of 2011, the company said.

Sales of iPod MP3 players slid 27% to 6.62 million in a predictable decline in the fourth fiscal quarter as people increasingly rely on smartphones for video and music.

ainland China has become Apple's fastest growing region, with revenue there second only to the US. "I've never seen a country with as many people rising into the middle class that aspire to buy products Apple makes," Cook said. "The sky is the limit there."

And Apple is seeing "significant opportunity" as well in Brazil, Russia and the Middle East, he added.

A formidable iPad challenger has yet to arrive, according to Cook, who believes that the tablet market will become larger than the personal computer market. Apple has sold over 40 million iPads since Jobs introduced the tablet early last year.

The company said it finished the quarter with slightly more than $80 billion in cash. 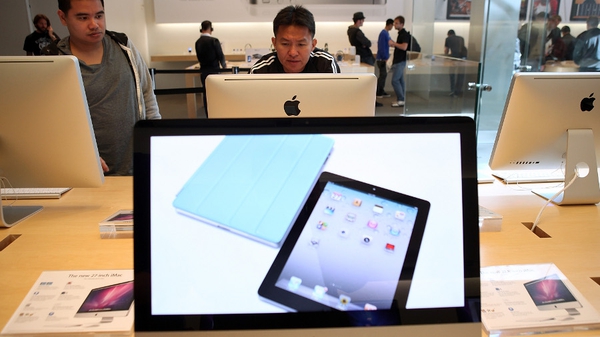