The chief executive of Bank Of Ireland, Richie Boucher, has signalled a rise in the bank's mortgage interest rates.

Mr Boucher told RTE the bank had not passed on a recent interest rate rise by the European Central Bank to homeowners on variable mortgage rates. But he said the bank could not continue to absorb higher funding costs without raising its rates.

Bank of Ireland this morning reported an underlying loss before tax of €723m for the first half of this year, down from a loss of €1.32 billion the same time last year.

Bank of Ireland's operating profit before impairment charges on financial assets and loss on sale of assets to NAMA fell to €163m from €479m in the first six months of 2010.

The bank says that just less than 5% of its owner occupier mortgage holders are in arrears of over 90 days - up from 3.7% at the end of December.

In its buy to let mortgage book 7.8% of mortgages are in arrears of over 90 days. But the bank says it is running a successful pre-arrears process, and is dealing with 5,000 customers who see difficulty ahead and are engaging with the bank.

On lending, Bank of Ireland says it is committed to lending the €3 billion the Government says it has to to small business.

Its loan approvals are at 80%, but that does not mean all of those loans are being drawn down. It says that demand for general loans is low.

Bank of Ireland said that impairment charges for the six month period came to €842m, a 22% reduction on the same time last year. However, the impairment charge on residential mortgages increased by €17m from €142m to €159m due to a higher level of arrears, higher unemployment levels, lower disposable income levels and falling house prices in Ireland.

Impairment charges on UK residential mortgages of €19m are continuing to decrease.

The 25 loans are backed primarily by commercial property in New York, Boston and Washington, and are classified as performing, the Journal said.
The loans were sold at close to face value, the paper added. 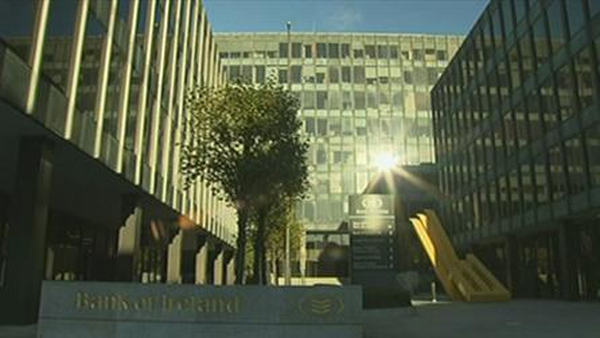 Bank of Ireland seeing some improvements