The British Chancellor of the Exchequer, George Osborne, has proposed a reduction of the interest rate on the UK bilateral loans to Ireland.

The UK lent Ireland some £3.25 billion sterling in a bilateral loan last year as part of a £7 billion contribution to Ireland's international bail-out package following the near collapse of its banking system.

'I've been arguing for some time that the interest rates charged for euro zone loans were too high,' Osborne said in a statement.

'I'm pleased therefore they have now reduced those rates. That enables Britain to cut its rate on its loan to Ireland, while ensuring all of the benefit goes to Ireland and not to higher interest rates paid to euro area governments.'

Under the new terms, Britain would still more than cover the cost of its borrowing, Osborne said.

'We stayed out of the Greek bailout as promised. But, for Britain, Ireland is a special case. Our loan will help them and is in our national interest,' he added.

Welcoming the news, Finance Minister Michael Noonan said it reflects the important economic relationship between Ireland and the UK.

'The willingness of the UK to assist Ireland reflects how both countries gain through sustainable economic growth that creates long term jobs', Mr Noonan added.

The Minister said he also thanked the Chancellor who has strongly argued the case for a European resolution to the crisis and the need for a reduction in the interest rates charged on the EU loans.

Finance Minister Michael Noonan has said the changes that have now been negotiated in Brussels will make the rescue programme more sustainable in the long term.

But he added that the changes will not be felt in the forthcoming December budget.

The Minister also said that euro zone countries have agreed to keep funding Dublin beyond 2013 if it is not able to tap debt markets.

'There is a commitment that if countries continue to fulfil the conditions of their programme the European authorities will continue to supply them with money even when the programme is concluded,' Noonan said on RTE's News at One.

EU officials say they expect Ireland to secure a further interest rate reduction for a second component of the Irish bail-out, known as the European Financial Stability Mechanism (EFSM).

The reduction would effectively match that secured at last night's meeting of euro zone leaders in Brussels for the European Financial Stability Facility (EFSF).

Combined, both interest rate reductions should be worth between €600-800,000 a year to the Exchequer.

According to Irish officials, the interest rate for the EFSF - the euro zone's principle bail-out mechanism - should fall to 'close to but not below 3.5%'

Euro zone finance ministers are expected to agree the necessary changes to the rate at a meeting in early September.

Any changes to the interest rate attached to the EFSM, through which Ireland receives €22.5 billion, will have to be agreed through a qualified majority vote by all 27 member states since it is effectively 'community' money.

However, it is understood that Taoiseach Enda Kenny was given assurances by heads of government at last night's summit that approval would be forthcoming.

It is understood that initial approaches have been made to both the UK and Danish governments over lowering the interest rates for the bilateral loans offered by those countries in the immediate aftermath of last November's bail-out.

Irish officials have also confirmed that further 'credit lines' would be available to Ireland from the EFSF after Ireland returns to the open market at the end of 2013.

These credit lines would be there to give market operators extra confidence about Ireland's funding situation, according to Irish officials.

If Ireland wished it could, 'in the future', apply to the newly enhanced EFSF for funding to buy back bonds on the secondary market.

French president Nicholas Sarkozy made no objection last night to Ireland being granted a lower interest rate, according to a senior EU official.

RTÉ News understands, however, that the Dutch insisted on tougher language on the rate cut, seeking to have the words 'close to 3.5%' rather that 'at 3.5%'.

Earlier, Taoiseach Enda Kenny has said the debt burden on the Irish people has been made lighter by the deal agreed last night at the euro zone summit in Brussels.

As well as a new €109-billion rescue package for Greece, the deal will benefit Ireland and Portugal with lower interest rates and longer repayment periods on the current loans.

Initial estimates by Irish officials suggest an annual saving to the state of at least €700m.

'It is clear there is still much work to be done in all corners of Europe before we are firmly out of the stormy waters,' EU Economic and Monetary Affairs Commissioner Olli Rehn said in a statement.

'But the direction is now clear, and we have all reasons to be confident about getting there, as long as all the partners do their share of implementation rigorously,' he added.

The deal agreed in Brussels yesterday will see holders of Greek bonds suffer losses but investors had anticipated more severe conditions than those ultimately agreed by EU leaders. 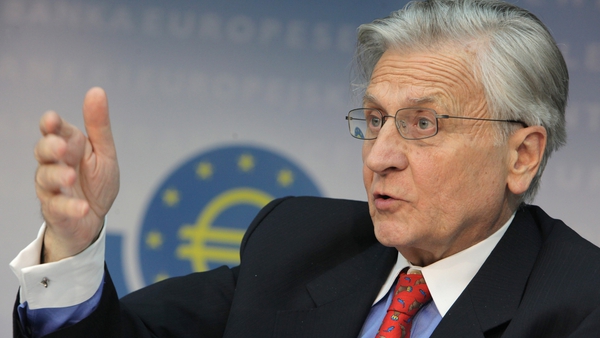