US Federal Reserve chairman Ben Bernanke has signalled that the Fed was prepared to renew its stimulus efforts if the economy remains feeble.

Two weeks after the end of its $600 billion bond-purchases program, or quantitative easing dubbed QE2, Bernanke told members of Congress that a new such effort could be launched, and other measures be taken, if economic weakness persists through the second half of the year.

'The possibility remains that the recent economic weakness may prove more persistent than expected and that deflationary risks might re-emerge, implying the need for additional policy support,' Bernanke said.

He said the Fed could follow in the footsteps of QE2 and increase its purchases of US securities, pushing more liquidity into the economy.

It could also cut a key interest rate it pays to banks on their reserves - which could help push down commercial lending rates, he said.

Meanwhile the Fed will take its time unwinding the QE2 program, he confirmed.

The central bank will continue to reinvest the original $600 billion into new Treasury securities and not reel the funds in as long as economic growth remains tepid, he said.

Bernanke defended the quantitative easing program, which some economists and finance industry analysts have argued had little impact in helping the economy recover from the 2008-2009 recession.

'The program had the intended effects of reducing the risk of deflation and shoring up economic activity,' he said.

'This was a significant achievement, as we know from the Japanese experience that protracted deflation can be quite costly.'

He also said it helped boost employment, even though the jobless rate remains a high 9.2%.

Bernanke said the US can expect only 'moderate' economic growth in the coming months, with some of the weaknesses of the first half of 2011 persisting.

He also told members of Congress that the inflation pressures of the first half of 2011 were temporary and should ease.

He added that, as a result, the Fed expected to keep its ultra-low interest rate policy in place 'for an extended period'.

A US debt default would spark a 'major crisis' and send shockwaves through the global economy, Bernanke said in a reference to the ongoing disagreement over the country's debt ceiling and deficit reduction.

If the US does not raise its borrowing ceiling by 2 August and is forced to stop servicing its debt commitments, it would 'throw the financial system into disarray and have an enoromous effect on the global economy,' he said.

Last night, details of the Fed's last meeting showed that some of its officials believed further monetary policy easing could be needed if the recovery remained too sluggish to cut the stubbornly high US jobless rate and if inflation eased as expected.

The minutes of the June meeting offered the strongest suggestion since the Fed's $600 billion bond-buying programme ended on 30 June that there could be consideration of a third round of quantitative easing.

Although the minutes showed officials were concerned that continued weak growth could undercut the two-year-old recovery, not all were convinced that renewed stimulus is needed.

A few held the opposite view, saying that if recent increases in inflation did not moderate, the Fed should consider tightening policy sooner than expected. 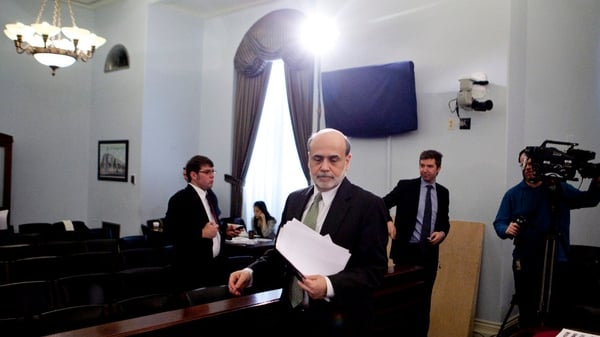