Finance Minister Michael Noonan has said the 'last red cent' of debt owed by the Government and the two 'pillar banks' will be repaid.

In an interview in New York reported by Bloomberg, he said he would seek to discuss Anglo Irish Bank's senior debt with the European Central Bank in 'late autumn'.

Yesterday, the minister told RTÉ Ireland will go to Europe with a plan to impose significant losses on some senior bondholders in Anglo Irish Bank and Irish Nationwide Building Society.

The Government has said it will not impose losses on the senior bondholders of the so-called pillar banks, AIB/EBS and Bank of Ireland.

Earlier, the European Commission said it had not received any proposal from the Government on the issue.

A spokesman for the EU Economics and Monetary Affairs Commissioner Olli Rehn said the Commission was 'always ready to consider any proposal in the context of completing the restructuring of the Irish banking system'.

Commissioner Rehn's spokesman Amadeu Altafaj declined to comment on whether the timing of Mr Noonan's announcement may have triggered a negative market reaction.

Ireland 'in better position' on bonds

Meanwhile, the Tánaiste has said Ireland is now in a much better position to force some senior bondholders in Anglo Irish Bank and Irish Nationwide to take a cut than when the EU/IMF bail-out deal was negotiated last November.

Eamon Gilmore said such action could not be done without the ECB's agreement.

The Tánaiste said the Government - which today marks its first 100 days in office - was now in a stronger negotiating position.

'The Irish economy is in an entirely different situation than the economies of some of the other countries whose budgets are in trouble. Therefore we are in a much stronger position today than we were at the beginning of this Government and certainly than we were in November to negotiate with the European Central Bank,' he said.

Fianna Fáil leader Micheál Martin said the coalition has been a Government of 'optics rather than substance'.

He said the vast majority of promises made by the Government parties in the general election campaign had not been fulfilled.

Finance Minister Michael Noonan said yesterday that Ireland will go to its European partners with a plan to impose significant losses on some senior bondholders in Anglo Irish Bank and Irish Nationwide Building Society.

He made his comments in Washington after meeting the IMF and the US Treasury Secretary Timothy Geithner.

Mr Noonan said that around €3.5 billion in senior unsecured, unguaranteed bonds issued by Anglo Irish Bank and Irish Nationwide Building Society should have losses imposed on them.

Mr Noonan said he had discussed this with the IMF, who supported the strategy.

The Finance Minister said these banks are no longer normal entities and are more like warehouses for bad debts. 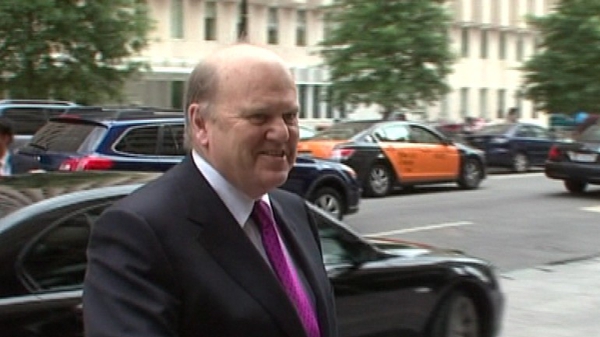