In a surprise move, the 24-member IMF board rejected changing the IMF's rules that would have allowed 67-year-old Fischer to run, two board official said. IMF rules stipulate an age limit of 65 for an incoming managing director.

The officials said changing the rules for Fischer, who is highly respected by both advanced and emerging economies, would have required a reopening of the selection process to allow other candidates older than 65 to participate in the race.

An IMF board statement later confirmed it had shortlisted Lagarde and Mexico's central bank chief Agustin Carstens and would consider their nominations, although made no mention of Fischer.

'The executive board will meet the candidates in Washington and, thereafter, meet to discuss the strengths of the candidates and make a selection,' the board said. It reiterated that it planned to complete the selection by June 30.

Front-runner Lagarde is backed by Europe, which holds one-third of the votes, and a handful of other countries including Indonesia, whose Finance Minister Angus Martowardojo said he personally supports her candidacy.

If she wins, Lagarde would become the first woman to head the IMF, which has been central in providing rescue loans to countries in crisis including Greece, Ireland and Portugal.

Carstens has the support of a dozen Latin American countries, including Colombia, in a race which, despite being one of the most hotly contested in IMF history, is widely expected to result in Europe maintaining its 65-year grip on the job.

Brazil, the region's largest economy, has not yet said whether it will back Carstens.

Israeli central bank governor Stanley Fischer expressed 'regret' today that age limits disqualified him for a run at the IMF's top job, saying the restrictions were 'not relevant today'.

In a statement released by the Israeli central bank, 67-year-old Fischer said he was informed last night that the IMF would not consider him for the top post because the rules require applicants to be younger than 65.

'I think the age restriction, which was set in the past at 65, is not relevant today,' he said. 'I was hoping that the IMF board of directors would change its regulations, not only for the sake of my candidacy, but also for the sake of future candidates for the position of managing director,' he added.

Fischer had been regarded as a particularly well qualified candidate for the post vacated by Dominique Strauss-Kahn, who resigned after facing sexual assault charges in New York.

He has won widespread praise for his handling of the Israeli central bank, and he has worked at both the World Bank and IMF, as well as in the private sector. But observers noted early on that his age would pose a problem unless the IMF was willing to revise its regulations.

As an American citizen, Fischer also faced another hurdle, as the IMF top post usually goes to a European, with the World Bank chief's position going to an American.

Despite the obstacles, Fischer was regarded as a strong candidate, and even a potential consensus option if the IMF found itself divided between the two other frontrunners, French Finance Minister Christine Lagarde and Mexico's central bank governor Agustin Carstens.

'I have no regrets for having submitted my candidacy. I do regret the fact that I was not given the opportunity to demonstrate my capabilities and my experience to the IMF Board of Directors,' Fischer said.

Still, Fischer can rely on a warm reception in Israel, where an economic newspaper recently ran an article on him headlined 'Please don't go'.

His stewardship of the Israeli economy, seen as having weathered the global economic crisis more successfully than almost any other nation, has made him a trusted and popular figure in the Jewish state.

In March, he was reappointed to a second, five-year term at the head of the Israeli central bank, and today he said he would continue in the job 'proudly and happily'. 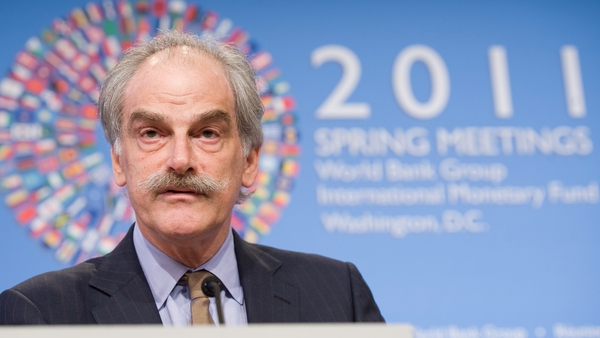