French Finance Minister Christine Lagarde, mentioned as a possible successor to Dominique Strauss-Kahn as head of the International Monetary Fund, said today that Europe should unite behind a single candidate.

'Any candidacy, whoever it may be, should come from the Europeans, who unite, all together,' she said on the sidelines of a news conference in Paris, without directly addressing the question of her own possible candidacy.

Strauss-Kahn, who is also French, resigned as managing director of the IMF on Wednesday in a letter from Rikers Island jail in New York, where he is awaiting trial on sexual assualt charges.

The leadership of the Washington-based institution, a key pillar of world financial architecture, is traditionally given to a European, and Lagarde has been cited as a possible candidate.

John Lipsky, who is acting as IMF head, said the Fund's executive board would meet later today to launch the search for a successor to Mr Strauss-Kahn.

'My understanding is that they will meet today to begin the process,' said Mr Lipsky. 'This is the responsibility of the membership, not the staff, not the management.'

The United States called for an open and prompt process for choosing the new head.

'As acting managing director, John Lipsky will provide able and experienced leadership to the Fund at this critical time for the global economy, US Treasury Secretary Timothy Geithner said in a statement.

'We want to see an open process that leads to a prompt succession for the Fund's new managing director.'

The resignation of Strauss-Kahn promises to set off a succession battle to lead the global lender pitting the developing world against the West.

Emerging economic powers could press for an end to the long-standing Western dominance of the institution, with Turkish former UN official Kemal Dervis also said to be near the top of the list.

But several candidates have been mentioned and a fight looms over whether the next chief will come, as tradition has dictated, from Europe, or from one of the rapidly developing economies flexing their muscles on the world stage.

As pressure swelled for the IMF to chart its course through the crisis, Strauss-Kahn said this morning that that he would step down as he again denied all the charges against him.

He did not give any indication of who he wanted to succeed him, saying only that he wanted 'to protect this institution which I have served with honor and devotion.'

The IMF itself has said little about the crisis and continued its work under acting director Lipsky, signing off this week on a €78 billion Portugal bail-out and putting pressure on Pakistan to improve its fiscal management.

Officially, the 24-member executive board votes to fill the top post, with votes weighted based on member countries' and regions' subscription quotas.

But traditionally it has been negotiated based on a pact that gives the US a hold on the World Bank's top job and Europe the IMF position.

Some European leaders have already called for another European to be named, with Lagarde and former German central banker Axel Weber mentioned as possible candidates.

In recent years, however, shifts that have given rising economies greater quotas, and dissatisfaction with the IMF's approach to many crisis-struck countries, have sparked pressure for a broader-based pool of candidates.

'South Africa calls for a candidate from a developing country to be given the opportunity to be the managing director of the IMF,' the country's finance minister Pravin Gordhan said yesterday.

'The era is over in which it may have been even remotely appropriate to reserve that important post for a European national,' Brazilian Finance Minister Guido Mantega said in a letter to G20 colleagues.

Mexico echoed those calls last night, saying the selection 'should be made through an open, transparent process based on the merits of the candidates and not favour the criterion of nationality.'

If it comes down to a board vote, the quota system favours the old economic powers: the US has 16.8% of the vote; Japan 6.25%; Germany 5.83%; and Britain and France each have 4.3%. As blocs, the G7 major economies hold 44.3% of voting rights, while emerging market and developing countries have 40.5%, based on March IMF figures.

But negotiations will play a major part, concluded Mohammed El-Erian, the chief executive of investment giant Pimco, who has also been mentioned as a candidate for the post.

The European Commission today called for a 'strong' European candidate to succeed Dominique Strauss-Kahn at the IMF, staking Europe's claim in an expected battle with emerging countries.

'The commission has taken note of the resignation of Mr Strauss-Kahn as managing director of the IMF,' said Pia Ahrenkilde-Hansen, spokeswoman for European Commission president Jose Manuel Barroso.

'The IMF needs strong leadership and president Barroso's position is clear,' she said.

'While nationality is not a criteria in relation to the succession of Mr Strauss-Kahn, it is only natural that the member states of the European Union, as the biggest contributor to the fund, agree on a strong and competent candidate who can rally support from the IMF membership,' the spokeswoman said.

Knowledge of the European economy is one useful qualification for any candidate to succeed Mr Strauss-Kahn, the EU's top economic official said today.

'It is essential that the managing director of the IMF will be chosen based on merit and competence,' Olli Rehn, the economic and monetary affairs commissioner in the European Union's executive Commission, said at a business conference.

'It is a merit if the person to be chosen for this task has knowledge of the European economy,' he added.

Meawhile, the German finance ministry believes the next IMF chief should come from Europe and emerging countries should provide successors in the long term, a spokesman said. 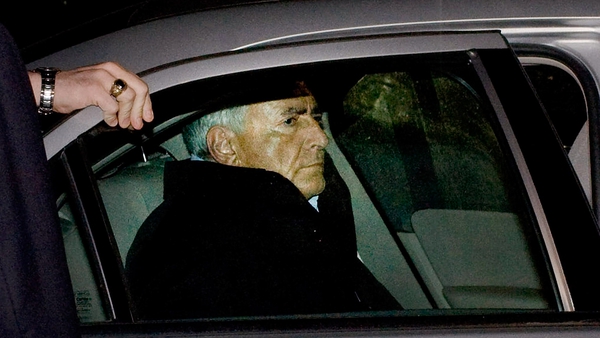 Strauss-Kahn case to have no impact - EU