The debt bail-out for Portugal is likely to require €80 billion from European partners and the IMF, and will include 'an ambitious privatisation programme,' EU Economic Affairs Commissioner Olli Rehn said today

Commissioner Rehn said he hoped a final deal will be in place by mid-May.

He said that the difficult political situation in Portugal - where a caretaker government is in charge until elections in June - makes it essential to reach a 'cross-party' agreement.

Meanwhile, the Minister for Finance Michael Noonan said today he hoped that Ireland could avail of a lower interest rate for its bail-out programme by June, if French and German concerns were overcome.

Speaking after a meeting with the German finance minister Wolfgang Schauble, Mr Noonan said that an agreement reached during an EU summit in March conceded that the general principle that an interest rate reduction could be factored into the European Financial Stability Facility. Ireland, and now Portugal, are participants in the EFSF.

Mr Noonan said that if the changes to the facility were passed by national parliaments and French and German concerns on a quid pro quo from Ireland were addressed, then the reduction of one percentage point would apply.

The pressure from the ECB led the banks on Monday to threaten to stop buying government debt if Portugal did not request a lifeline - an ultimatum which probably tipped Prime Minister Jose Socrates into seeking European aid.

Today, Mr Trichet denied the ECB had pushed Portugal towards a bail-out, though a day earlier he did admit the central bank had encouraged Lisbon to request aid.

Eurogroup head Jean-Claude Juncker said that euro finance ministers instructed the EU, the IMF and Portugal's politicians to negotiate the country's bail-out by mid-May for implementation after June 5 elections.

Ministers 'invited the European Commission, the ECB, the IMF and Portugal to set up a programme and take appropriate action to safeguard financial stability' across the 17-state eurozone, Luxembourg Prime Minister Juncker said.

'Financial support will be provided on the basis that a policy programme will be supported by strict conditionality negotiated with the Portuguese authorities, duly involving the main political parties,' he added.

He said a 'cross-party agreement' in Portugal was needed for the plan, which will require heavy spending cuts, tax rises and other reforms in exchange for some €80 billion.

The package is to be adopted by mid-May and 'implemented by the new government' in June.

European Central Bank head Jean-Claude Trichet said it was essential that structural budgetary adjustments were at the heart of the plan and that the 'hard work should begin immediately.'

Portugal is the third euro zone country after Greece and Ireland to request a bail-out and its plight has increased speculation that Spain - the fourth largest economy of the 17 countries which use the euro single currency - will also ask for help.

Socrates, who announced he was standing down after the vote, had presented the cuts as a last chance to avoid a bailout as Portugal must repay some €4.2 billion of debt by April 15 and another €4.9 billion by June 15.

Despite the vote in parliament, Portugal's euro zone partners are expected to pressure Lisbon to carry out more spending cuts if it wants to get its hands on cash from the European Financial Stability Fund (EFSF).

'The package must be very strict,' Finland's Finance Minister Jyrki Katainen said as he arrived for the talks. In exchange for loans, Lisbon will have to slash its budget and austerity measures 'must be harder than (those) that the parliament in Portugal voted against,' Katainen said.

'There must be some structural reforms, fiscal consolidation alone is not enough,' he added.

The finance minister of the continent's economic powerhouse Germany said yesterday that Portugal's request for EU aid is a 'sensible and necessary step,' given its plight.

'The markets also seem to see it this way, judging from initial reactions,' Wolfgang Schaeuble said in a statement.

After its neighbour buckled, Spain has once again found itself having to fiercely deny that it will go cap in hand to help it overcome its financial woes. Unemployment in Spain is now around 20% - the highest in the industrialised world - and its economy has either been in recession or stalled for several years.

A buoyant property market collapsed in 2008, devastating its banking sector. The desperate plight of its regional savings banks has already necessitated a radical restructuring by the Socialist government in Madrid.

The Spanish government insists that it will not need a bailout after introducing its austerity package and reforms, which have proved deeply unpopular. As she arrived at the talks, Spain's Finance Minister Elena Salgado said that Portugal would 'of course' be the last euro zone country to need a debt bail-out. 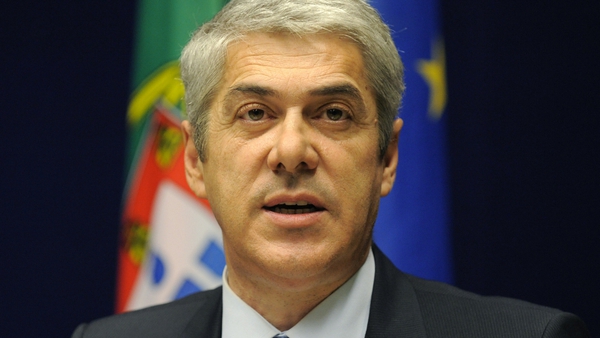