Japan and its economic allies today vowed to intervene jointly in world currency markets for the first time in a decade to calm turmoil sparked by a huge earthquake and a deepening nuclear crisis.

The announcement that the Japanese, US, euro zone, Canadian and British monetary authorities would take concerted action immediately pushed down the yen as intended and helped to lift battered Tokyo shares.

The pledge came after emergency telephone talks by the Group of Seven nations in response to a surge in the yen, which threatened the Japanese economy's recovery prospects following the March 11 quake and tsunami.

'We express our solidarity with the Japanese people in these difficult times, our readiness to provide any needed cooperation and our confidence in the resilience of the Japanese economy and financial sector,' a G7 statement said.

'As we have long stated, excess volatility and disorderly movements in exchange rates have adverse implications for economic and financial stability. We will monitor exchange markets closely and will cooperate as appropriate,' the statement added.

The G7 groups Britain, Canada, France, Germany, Italy, Japan and the US.

The European Central Bank and German central bank today confirmed they were participating in joint intervention with Japan to stabilise foreign exchange markets after the G7 agreed to weaken the yen.

The ECB said in a statement that it 'will join with Japan, on 18 March 2011, in concerted intervention in exchange markets,' but a spokeswoman declined to comment further.

A spokeswoman at Germany's Bundesbank said it had taken part in a global effort to keep the Japanese yen from spiking higher in the aftermath of last week's massive earthquake but could not provide specific details.

Dealers said Japan appeared to have intervened soon after the G7 announcement, selling around 2 trillion yen. The unit had strengthened sharply despite fears of a major hit to the Japanese economy from the natural disasters and resulting atomic crisis.

The dollar rose sharply against the yen today in the wake of the G7 pledge, rebounding back above the 81 level. It fetched 81.76 yen this morning. The dollar had tumbled below 77 yen yesterday, hitting its lowest level against the Japanese currency since World War II, a move Tokyo blamed on speculators betting on an influx of capital to aid reconstruction efforts.

A stronger currency is bad news for Japanese exporters already battered by the quake-tsunami disaster, which has left almost 17,000 people dead or missing and inflicted widespread damage to homes and infrastructure.

'We believe it is extremely important that G7 countries unite and cooperate towards stabilising the markets when our country is in a difficult state,' Japan's Finance Minister Yoshihiko Noda said.

The Bank of Japan injected another four trillion yen ($49 billion) of emergency funds into the short-term money markets today - the latest in a series of injections to prevent financial institutions running out of cash.

Tokyo shares surged as investors welcomed the G7 announcement, with the Nikkei index closing 2.7% higher. Shares of TEPCO, which operates the troubled Fukushima Number One nuclear power plant, closed up 19%, having lost over 62% over the past five sessions since Thursday. The Nikkei index had suffered the biggest two-day sell-off for 24 years on Monday and Tuesday, plunging 16%.

Markets have been on edge all week as Japanese authorities battle to regain control of a stricken nuclear power plant that has suffered a series of blasts after the 9.0-magnitude quake and tsunami.

Officials have been trying to douse radioactive fuel rods using helicopters and water cannon while also racing to reconnect electricity to restart the plant's cooling systems in a desperate bid to prevent more radiation leaking.

Japan relies on its nuclear plants to provide around 30% of its energy needs, and shutdowns in the wake of the massive earthquake have led to rolling outages that have forced companies to suspend production lines.

Damage from the earthquake could potentially amount to tens of trillions of yen and could lead to months of disruption to Japan's factory production due to supply problems and power cuts, analysts say. 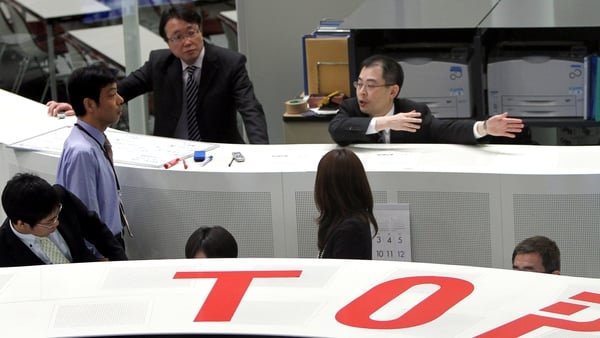