European leaders meeting this evening are divided on immediate steps to shield the euro from market fears that Portugal and Spain could be the next debt dominoes to fall after massive Greek and Irish bail-outs.

German Chancellor Angela Merkel urged European Union partners to rally behind the single currency going into a two-day summit in Brussels, saying its success depended on their unity.

The summit is set to be a milestone of sorts in the evolution of the European Union and euro zone. The outcome is keenly awaited on financial markets which have been in a state of high uncertainty and nervousness for the last two months, driving Ireland to follow Greece into a rescue.

Heads of state and government, including Taoiseach Brian Cowen, begin their seventh and last summit of the year later this afternoon to lay the foundation for a permanent financial rescue system to protect the euro zone for good after a tumultuous year.

But they are split on calls to boost the coffers of a temporary crisis fund and to create a joint eurozone bond to help weaker economies borrow money at lower interest rates.

Warnings this week by major credit rating agencies that they could downgrade the debt of Spain and Belgium showed that the single currency area - to expand to 17 nations when Estonia joins on January 1 - has yet to close the chapter on the debt drama that began in Greece.

Spain had to pay significantly higher interest in a bond sale today that raised €2.4 billion.

The market for debt issued by euro zone countries in severe difficulties over their public finances is distorted because the European Central Bank is buying up some debt to hold down the yields or interest rates which the governments concerned must pay to borrow.

Europe's financial crisis has forced governments to implement unpopular austerity programmes that have led to massive street protests, including a new general strike in Greece yesterday marred by violence.

At their last summit in October, EU leaders agreed to tighten fiscal discipline to prevent countries from running up the huge public deficits and debts at the root of the crisis.

They now want to turn a €750 billion joint EU-IMF rescue mechanism, which was created in May and expires in mid-2013, into a permanent fund. Some such as Belgium want the replacement fund to be substantially bigger.

Either way, they have to tweak the year-old Lisbon Treaty, the bloc's rule-book, to create the permanent fund - a condition set by Germany to ensure that its top constitutional court cannot challenge its legality.

After years of problems that dogged ratification of the treaty, EU governments want to make only limited changes to avoid having to go through referendums fraught with risks.

The European Central Bank, which has bought €72 billion of government bonds in moves to contain gaps in interest rates between Germany and under-pressure eurozone states, has urged leaders to beef up the European Financial Stability Facility (EFSF), a €440 billion pot of loans and guarantees anchoring their temporary plans.

But led by Merkel, the leaders have so far resisted pressure to pump extra money in to reassure investors that they can rescue a major economy like Spain's.

A rump of hardline countries say there is no urgency to boost the EFSF as it has barely been touched so far. Berlin and Paris have also rejected a proposal to create joint eurozone bonds to help weak countries struggling with high interest rates.

Juncker, who heads the group of euro zone finance ministers, warned he may push for a discussion on the idea despite their objections. 'For a systemic crisis you need a systemic response,' Juncker said. 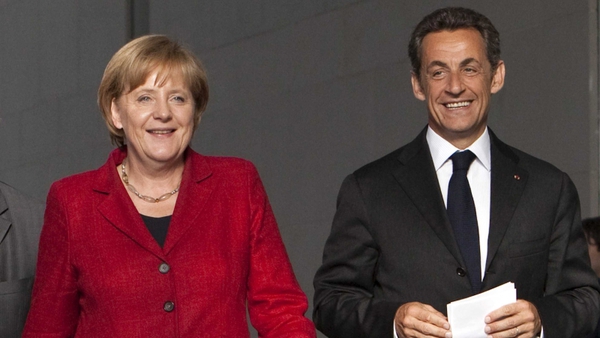