Taoiseach Brian Cowen says Ireland has formally made a request for financial assistance from the EU and International Monetary Fund.

He said the terms of the funding being sought would be the subject of negotiations. The funds would be used to put the Irish banking system back on its own two feet, and to address the budget deficit.

Mr Cowen also said income tax levels would be returned to 2006 levels, but corporation tax rates would not be changed as part of this deal.

The Minister for Finance, Brian Lenihan, said Europe stood fully with Ireland. He repeated that the figure involved in the deal would not reach €100 billion, and that not all of the money on offer would be drawn down. He said the period of the loan had not been determined, although normal programmes applied over three years.

Minister Lenihan said he expected that any package would include a regular set of reviews to ensure that Ireland was complying with targets agreed under any plan.

Mr Lenihan said a clear option now was to look at bank assets - the vast part of the banks now being in public ownership - and to see what assets could be disposed of.

Central Bank Governor Patrick Honohan said tonight's announcements allowed the course of economic and financial policy to be set on a more secure path. 'We can be reassured that the Irish banking system retains the support, not only of the Central Bank of Ireland, but of the European institutions, he added.

The Government said the support would be provided 'under a strong policy programme which will be negotiated with the Irish authorities by the Commission and the IMF, in liaison with the ECB'.

It said a central element of this would be to support further 'deep restructuring' and the restoration of the long-term viability and financial health of the Irish banking system. The programme will address the potential future capital needs of the banking sector. 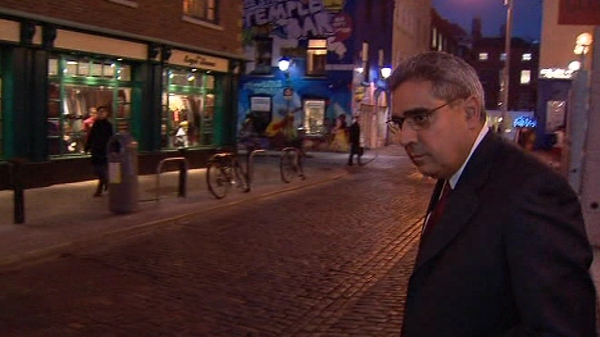 Ireland will need outside help - Lenihan