Minister for Finance Brian Lenihan has said it is clear that the country will need some sort of external assistance to address the problems in the banking sector.

He was speaking after a spokeswoman for the International Monetary Fund has confirmed that an IMF mission planned to begin work tomorrow morning to assess what may need to be done to assure financial stability.

Caroline Atkinson told reporters in Washington that the head of the mission, Ajai Chopra, had already arrived in Dublin, and the rest of the team - likely to number 10 to 12, including banking experts - was on its way.

The spokeswoman repeatedly declined to comment on 'hypothetical' questions about how much aid Ireland might need or how a package could be structured. The International Monetary Fund has not received a request for financial support, she said.

Professor Honohan said the negotiations were not about a bail-out, but would lead to a loan of tens of billions to Ireland, and that the Government would have to accept it.

'The intention is and the expectation is, on their part and personally on my part, that negotiations or discussions will be effective and a loan will be made available and drawn down as necessary,' Professor Honohan said.

Minister Brian Lenihan told RTE the team of IMF and EU officials were not arriving in Dublin to direct Ireland's affairs, but that the Government would be discussing the banking problems with them.

Mr Lenihan said he felt no sense of shame in fighting for the country's interests. He said the finance ministers of other countries agreed the Government here had taken the correct steps, but the banks had grown too big for the state to manage.

Mr Lenihan said that all contacts before last Tuesday had been on the level of officials, but on Tuesday a political decision was taken to discuss the matter of external assistance. He said that on Tuesday he had indicated that one of the options was not putting money into the banks but providing a contingency fund to stand behind them.

Mr Lenihan said Professor Honohan 'may well be right' that a large sum would be needed but figures had not been discussed. The Minister repeated the Government's stated position that Ireland's 12.5% corporation tax rate was an 'absolute red line' and that many of the organisations involved in the talks agreed with that.

Earlier, Professor Honohan said the purpose of the talks in Dublin was to provide re-assurance to international markets, to our EU partners and internationally that the policy stance the Government was adopting was designed and would be effective in getting us back on a stable debt trajectory which was sustainable indefinitely.

He said the aim was also to provide assurance to investors and depositors in the banks that they, as independent outside examiners, were satisfied about the condition of the banks and that the banks had adequate capital resources to meet any call that might come to them.

He says he does not see the visit as a 'worrisome' event or something that would lead to a change in the Government's direction on the economy.

Professor Honohan said the IMF and ECB would not bring a big technical team to Dublin if they were not sure that a plan could be designed and agreed for the Irish economy. He says the loan will be 'large' to show that Ireland has sufficient 'fire power' to deal with its problems.

Professor Honohan says the interest rate charged on any loans from the IMF/ECB will be roughly in line with previous IMF loans, but says the issue is complicated.

On the banks, the Central Bank Governor says the huge amounts of money put into them already have not yet generated sufficient confidence on international markets. He says the banks will use any IMF/ECB money as contingent funding which can be shown to international investors but does not have to be used. The funds can be used as a buffer and come back out when they are not needed, as happened in the US in 2008.

Professor Honohan says that there have been substantial outflows of deposits from the banks since April as large investment funds and institutions, who had invested in the Irish banks at the height of the economic boom and when the country had a AAA rating, decided to pull out when we lost that rating.

But he points out that all this was replaced by borrowings from the ECB. He says the banks have the facilities to deal with these outflows of money.

Government had been protecting taxpayers - Lenihan

Minister Lenihan told the Dáil earlier that if the Government had been reticent in public comment about contact with our European partners and the IMF it had been to protect the taxpayer.

Brian Lenihan said it was the job of the Government to protect the taxpayer and that is what it has been doing. He said our problems did not relate to budgetary matters but they were problems of a structural nature in the banking sector.

The Minister said the IMF and ECB team were here to look at what shape a financial package might take and there was no question of loading an unspecified burden on the taxpayer.

He again defended the bank guarantee, saying the Governor of the Central Bank had defended it this morning and the European finance ministers have agreed it was the correct strategy at the time

The Minister has moved to reassure the public that all deposits in Irish banks are 'safe and secure'.

The Minister for Finance has confirmed to the Dáil that the country would likely be borrowing money at rates above those available from the European Central Bank.

Labour's Pat Rabbitte asked him to confirm that 'a chunk of any money on loan would go into the banks after being borrowed by the state at a rate that would be higher than the current 1.5% from the ECB.'

Mr Lenihan said the deputy was correct and that it was an important issue in the discussions. But he said he did not believe it would be a focus to 'turn the state into a Central Bank which would lend at 4% or 5% at its own cost.'

He said he understood the focus of the discussions would be on providing capital or a contingency capital fund that can stand behind the banks, as distinct from liquidity.

One of the main credit rating agencies, Fitch, says it will review Ireland's rating in the light of any package agreed with the IMF and EU.

It said such a review would look a number of factors, including the financial terms of any help and its implications for the Government's finances. Fitch said it would also look at whatever policy programme was agreed, and if the measures would allow Irish banks and the Government to regain access to market funding at an affordable cost.

Fitch said it was now clear that actions taken by the authorities in September had not succeeded on restoring confidence in the banking sector.

Fitch currently rates Ireland at A+ with a negative outlook, meaning it is consdiering a further downgrade.

Meanwhile, British Prime Minister David Cameron said he did not want to speculate about Ireland's position when he was asked by MPs today about the likelihood of a bilateral bail-out. Speaking to a House of Commons committee, Mr Cameron said: 'I don't want to rule things out, but I don't think we should be speculating.' 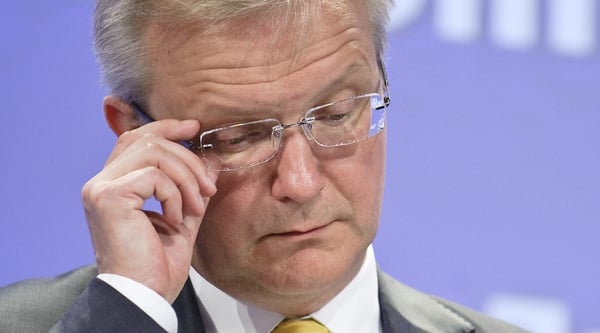