The EU Commissioner for Economic and Monetary Affairs Olli Rehn has said talks due to get underway in Dublin tomorrow between the IMF, ECB, Commission and the Government, will focus on two main areas.

The first would be the Government's four-year budgetary plan, including next year's Budget, to ensure that the overall plan delivers the targeted 3% deficit by 2014. The second would be the banking sector and the need for restructuring.

Mr Rehn said the whole banking sector would be looked at to find out its real needs. But he would not be drawn on what 'restructuring' might involve, nor on the question of what conditions might be attached should a rescue package be required.

But he stressed that neither of the two EU rescue mechanisms - the EFSM (€60 billion) nor the EFSF (€440 billion), could be used to provide direct lending to the banking sector. 'They can only do so through a country programme, but one with a special emphasis on strengthening the banking sector,' he said. He was speaking during a news conference following this morning's Ecofin meeting of all 27 EU finance ministers.

Meanwhile, the president of the European Commission, Jose Manuel Barroso, has said the Commission is not putting pressure on Ireland to resort to EU financial help. But he added that Ireland must act speedily as it addressed a very specific problem in the banking sector.

European economic affairs commissioner Olli Rehn also said a potential British role in a bailout was 'under discussion', hours after the European Commission and the IMF announced the launch of the mission to Dublin. Finance Minister Brian Lenihan said any British participation was a matter for London.

Mr Osborne told reporters that London, which is not part of the euro zone but is a member of the wider EU, would do 'what is in Britain's national interest'.

'Ireland is our closest neighbour. And it's in Britain's national interest that the Irish economy is successful and we have a stable banking system,' he said. 'So Britain stands ready to support Ireland,' Osborne said.

Representatives from the European Commission, the European Central Bank and the International Monetary Fund will come to Dublin tomorrow to examine Ireland's finances and banking sector.

Mr Lenihan said there were no deadlines, but there is a determination by the Government to engage in this short and focused consultation.

He said it was only right that institutions that may get involved in providing funds for Ireland to tackle its banking and fiscal crisis should be able to establish the facts on the ground for themselves.

He said the IMF was involved because it had more experience than the ECB in dealing with banks which have caused difficulties, and which are at the centre of the Irish debt problem.

But he said Ireland had not applied for any funding and it was not certain that the country would seek funding from the European Union and IMF in the wake of the joint mission.

Austria has raised the sensitive question of demanding that Ireland increase its corporate tax in exchange for an international rescue.

Attending the EU talks in Brussels, Austrian finance minister Josef Proll was asked whether, in the case of a rescue, Ireland should be urged to raise the taxes. 'We will also have to discuss this question with the Irish government,' he said. Ireland's corporate tax rate is currently 12.5%.

Proll admitted it was a difficult question as it risked triggering an exodus by companies that came to Ireland due to its low taxes. 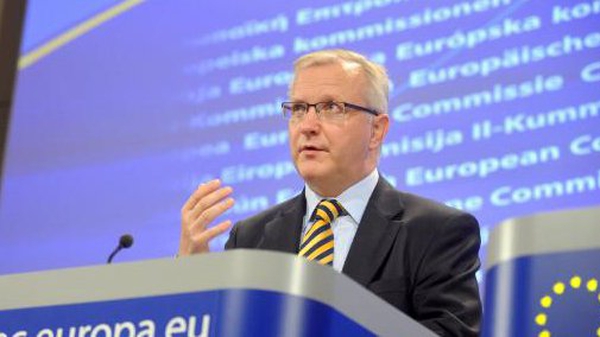