The Minister for Finance, Brian Lenihan has said a statement of solidarity from EU leaders on Ireland's debt crisis is a step in the right direction but it was now imperative that next month's Budget be passed.

Pressure on Irish bond prices eased following the joint statement by Germany, France and Britain at the G20 summit in South Korea which was aimed at reassuring the markets.

'Whatever the debate within the euro area about the future permanent crisis resolution mechanism and the potential private sector involvement in that mechanism we are clear that this does not apply to any outstanding debt and any programme under current instruments,' the statement said.

On RTÉ's News at One, Mr Lenihan said the markets were looking for further black holes in the Irish banking system but both the Governor of the Central Bank and the Financial Regulator have said there were none.

He said the Government has accepted the assessment of the losses by the Central Bank and the Financial Regulator.

In relation to banking and monetary problems, he said that because we are part of a common currency they raise far wider issues and can be addressed in a wider way with our European partners.

Mr Lenihan said that when markets remain as turbulent as they have been, it is not the fault of Ireland or of the Government and is part of a wider international problem.

He said this is why it's been discussed at the G20 and European partners are anxious to bring it to a resolution.

He said the German Chancellor Angela Merkel said the only way to address the issue is from 2013 onwards.

He said the markets do not disbelieve the Government's figure on the bank bailout but they haven't fully believed them yet either and have to fully digest the information since it was published in September.

He said Ireland is following the correct course of action in relation to its budgetary plan and international organisations are supportive of the €6bn adjustment in the Budget.

Mr Lenihan said that contrary to speculation Ireland has not applied to join any facility.

In relation to applying to the European Financial Stability Fund, he said the State is well funded into June of next year to fund the budget.

Mr Lenihan said the single most credible step we can take as a people is to rally around the four-year plan that will show we are on a credible track in correcting the public finances and have a strategy on growth and jobs.

He said it was necessary to do the first instalment of that strategy in the budget.

He said if the budget was not to pass this year it would be a major failure in the credibility of the entire political system.

He said he is satisfied that there will be full political support for the Budget and the Government can give leadership of where the country can go.

The EU is looking at new rules for debt issued from 2013 that may entail private investors rolling over existing debts or to bear their share of losses, as has been the case in new contracts written into debt programmes of some emerging market issuers.

Ireland forced its way onto the G20 agenda as investors fretted it could default as a result of the rising costs of its bank rescue programme that has already driven its budget deficit to 32% of gross domestic product.

'I spent a bunch of time, and I'm sure other ministers did, talking about developments in Europe. But that's what you'd expect,' a senior US official said, in response to a question about Ireland. 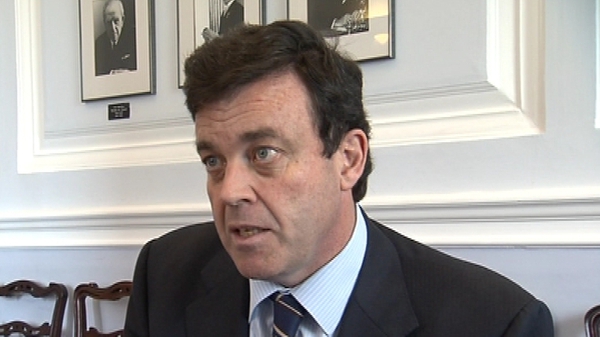