The European Commissioner for Economic and Monetary Affairs, Olli Rehn, has been meeting political parties and representatives of the social partners in Dublin.

He told Opposition party finance spokespeople that the €15 billion in budgetary adjustments required for Ireland over the next four years could be re-negotiated, depending on economic growth.

Mr Rehn has said that Ireland would benefit from having medium-term budget planning.

Speaking at the Institute of European Affairs, Mr Rehn said there are clear social and economic benefits to better medium-term planning.

He welcomed the Government's commitment to bringing the Budget deficit below 3%. And he said he looked forward to seeing a greater level of detail when the government publishes its four-year plan.

He said medium term budget objectives and their concrete implementation with expenditure ceilings should become a permanent feature of fiscal policy making in Ireland.

Earlier, David Begg, General Secretary of ICTU said that while Commissioner Rehn did not share the views of the trade union, he acknowledged it was a question of judgement as to how to deal with the economic crisis.

After meeting with the commissioner this morning, Fine Gael Finance spokesperson Michael Noonan said that Mr Rehn is not, however, asking Fine Gael to vote for the budget.

Both he and Labour Finance spokesperson Joan Burton confirmed their support for the target of reducing the budget deficit to 3% by 2014, but Labour repeated its view that the figure of €6 billion for this budget is, in the party's view, too much.

Earlier, Sinn Fein's Caomhghin O'Caolain said he told Commissioner Rehn that excessive austerity measures would 'kill confidence' in the Irish economy, and asked him to reconsider.

Mr O'Caolain said he told the Commissioner that the budget deficit could not be brought down to 3% by 2014.

Last night, Mr Rehn called for political consensus to back measures to cut the budget deficit. He said the Irish credit boom and property bubble were unsustainable and the subsequent crash hit the banking sector, the public finances and the Irish people very hard.

However, Mr Rehn said the positives had to be emphasised as well as the negatives, including a well-educated, skilled and flexible workforce.

Finance Minister Brian Lenihan said the European Commission was not here to dictate policy to the Government. 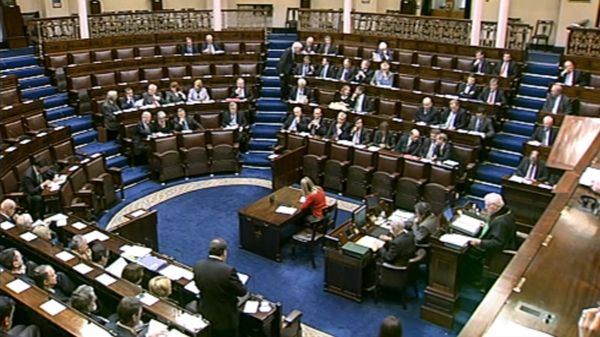