AIB has said the process of trying to sell its UK businesses has been tough due to current conditions in the market, but it is keeping the sale process 'under review'.

The bank issued the statement tonight following earlier comments from its new executive chairman David Hodgkinson, who said the bank had put the sale of its UK businesses on hold after failing to get any decent bids. A delay in raising money from the UK sale could result in the state's owning around 95% of the lender.

The divisions earmarked for sale are AIB's business bank in Britain and its First Trust retail operation in Northern Ireland. The book value of the businesses is around €1.2 billion but their loan quality is weak.

'There was an attempt to sell it and it could not be sold on satisfactory terms. So, we are now going to work with the UK bank to try and strengthen it, stabilise it and we will start re-examining all the options for it,' Hodgkinson told reporters at the bank's EGM in Dublin today.

The IBOA union has called for a meeting with Mr Hodgkinson to clarify the situation in relation to the UK businesses. 'No-one had told either the union, the staff or the shareholders that the decision to withdraw the business from sale had already been taken,' said secretary general Larry Broderick.

So far, AIB has managed to raise €3.4 billion from offloading its stakes in banks in Poland and the US.

AIB shareholders have approved the sale of the bank's 22% holding in US lender M&T in order to raise about €1 billion.

Earlier, AIB's new executive chairman David Hodgkinson told an extraordinary general meeting that while AIB's problems were difficult, they could be overcome.

Mr Hodgkinson, a senior British banking figure, was appointed last Wednesday. Today, he expressed 'deep regret' to shareholders, many of whom have seen their savings destroyed as the stock has fallen from €23 to 34 cent.

It also emerged at today's meeting that Mr Hodgkinson will be paid €500,000 a year. Shareholders today welcomed Mr Hodgkinson's appointment instead of somebody within the bank. One speaker it was like the arrival of Wyatt Earp in Dodge City.

Mr Hodgkinson said today that AIB would launch a €5.4 billion capital-raising programme later this month, but it was 'highly likely' that the Government would end up owning a significant majority stake in the bank. He also confirmed that the plan would be structured to enable AIB to retain its stock market listing.

AIB also said this morning that its group managing director Colm Doherty had formally stepped down today from the bank's board. This follows the announcement in September which said that Mr Doherty would depart AIB before the end of 2010.

Mr Hodgkinson also told the EGM it would not be updating shareholders on its financial performance today, but would issue a trading update later this month. 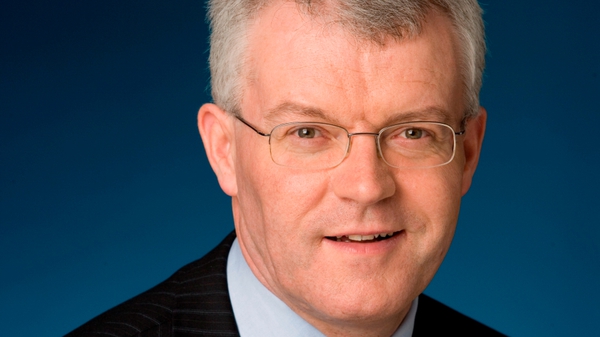 AIB's top two are to step down