The Government has said it will need to bring in measures totalling €15 billion over the next four years to meet a 2014 target for cutting the budget deficit agreed with the EU.

This is double the figure set out in last year's Budget. The Government must bring the deficit down to 3% of economic output by 2014 to come back in line with EU rules.

In a statement, the Government said the main reasons for the significant increase were lower economic growth prospects at home and abroad and the higher cost of paying interest on our debt.

The Government said the scale of the measures needed for next year and a breakdown for the remaining three years would be announced in the proposed four-year plan, expected to be published next month.

The Government said it realised that the spending cuts and revenue raising measures needed would have an impact on people's living standards, but warned that it was 'neither credible nor realistic' to delay these measures.

'To do so would further undermine confidence in our ability to meet our obligations and responsibilities and delay a return to sustainable growth and full employment in our economy,' the Government said.

Its statement came after a two-day Cabinet meeting held to discuss the Budget plans.

No department will escape, says Hanafin

Finance Minister Brian Lenihan said this evening that a 'significant front-loading' of the €15 billion figure would be needed in 2011, though precise figures would not be given until the middle of next month.

He acknowledged that the Government was concerned about the impact of the multi-billion euro measures, but said they had to happen to put the public finances back on a sustainable footing.

Minister for Tourism and Sport Mary Hanafin told RTÉ radio's Drivetime no department would be ring-fenced from cuts in the upcoming Budget. She acknowledged that a cut in child benefit was possible, but she said it was difficult to tax. 'There was no way of identifying who the high-earning families who got child benefit were,' she said.

Minister Hanafin said the aim was to present a four-year plan to the Dáil and the international markets in mid-November. She also said the Budget would include spending cuts and tax increases.

Justice Minister Dermot Ahern told RTÉ television that the €15 billion figure was based on average economic growth of 2.75% over the next four years - just above the lower of two scenarios set out recently by the ESRI. 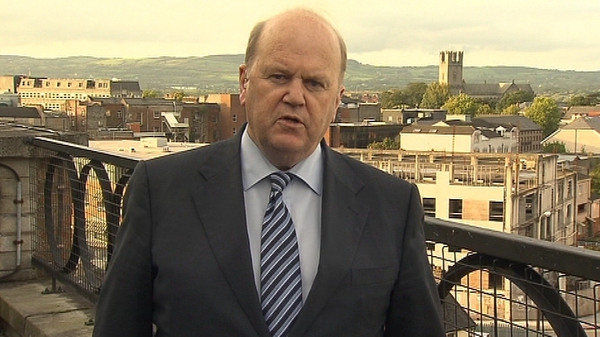