Conditions in the construction sector here continued to deteriorate in May, although the rates of decline in new business and employment both slowed last month.

The Ulster Bank Construction Purchasing Manager's index stood at 40 in May, a substantial decline from the reading of 42.5 in April. Any figure under 50 signals contraction, while a figure over 50 is an indication of growth.

Activity in the construction sector has now fallen every month since June 2007.

Ulster Bank said that activity decreased at broadly similar rates across the three sectors monitored by the survey - residential, commercial and civil engineering. It noted that activity on both residential and public sector projects slowed at sharper rates than in April, but commercial activity fell at a slightly weaker pace.

Today's survey shows that new business decreased again last month, extending the current sequence of reduction to 38 months. However, it added that the rate of contraction was only modest.

But as new business continued to fall, Irish building firms continue to cut jobs. Reducing employment numbers was also an attempt by firms to cut costs.

Average input costs for builders increased for the first time since August 2008. This was due to higher raw material costs, as well as the relative weakness of the euro against the dollar.

However, today's survey also shows that optimism in the construction sector improved to its strongest level in 38 months due to improving economic conditions boosting confidence.

'The May reading indicates that the recession in the beleaguered construction sector has now lasted for three full years, as the index level of 40 was the 36th consecutive reading below the 50 breakeven level,' commented Ulster Bank's chief economist Simon Barry.

'A fresh, additional challenge facing the sector picked up by last month's survey was the first rise in input costs since August 2008, a development that partly reflects the euro's fall on the currency markets in recent months, which looks to be exerting upward pressure on import prices,' he added. 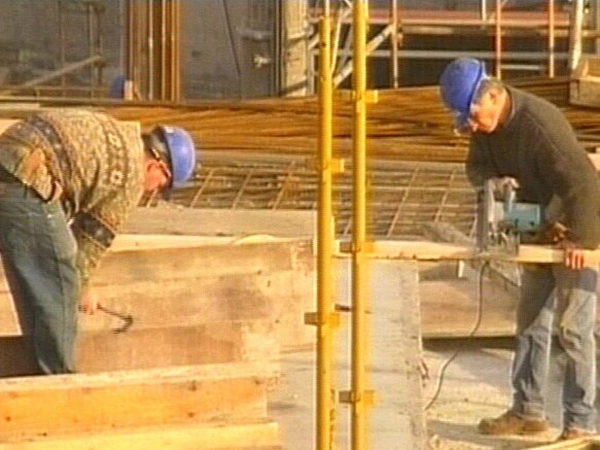 Half of construction jobs have disappeared