Continuing worries about the Greek debt crisis, and its possible spread to other euro zone countries, have led to fresh increases in the cost of borrowing on international markets.

The fears also affected the euro, which tumbled under $1.27 earlier this afternoon. The euro went as low as $1.2691, the lowest level since March last year.

On bond markets, the yield, or rate demanded by investors, on Greek 10-year government bonds jumped to 11.44%. Portuguese 10-year bonds rose to 6.17%, while the equivalent figure for Irish bonds rose above 5.8%.

While the cost of borrowing for Ireland will be of concern, it is not as critical as for Spain and Portugal. This is because the National Treasury Management Agency has raised substantial amounts of cash and could wait until next year to borrow from the markets.

The rises came despite news that Spain successfully raised €2.345 billion today in the country's first debt sale since its credit rating was cut last week. But the yield on the notes due in April 2015 rose to an average of 3.532% compared to 2.81% the last time such bonds were issued in March, a spokesman for Spain's secretary of state said.

Spain's economy, which is more than four times the size of Greece, has been contracting since the second quarter of 2008 following the collapse of a property bubble.

Warning that Greek effect could spread to banks

Moody's said in a report that 'the potential contagion of sovereign risks to banking systems could spread to other countries such as Portugal, Spain, Italy, as well as Ireland and the UK.'

Earlier, Greece's Finance Minister George Papaconstantinou told parliament that the unprecedented austerity drive is the 'only way to escape bankruptcy'. He made his comments ahead of the vote on the measures.

'The only way to escape bankruptcy is to accept the EU and IMF aid money, which reaches €110 billion and the precondition is to agree on the three-year austerity plan,' Papaconstantinou said.

Papaconstantinou asked 'all Greeks' to support the austerity measures a day after huge protests in Athens degenerated into rioting.

Greece was reeling from the shock killing of three people, reportedly including a woman four months pregnant, in a firebomb attack on a central Athens bank by rioting youths. 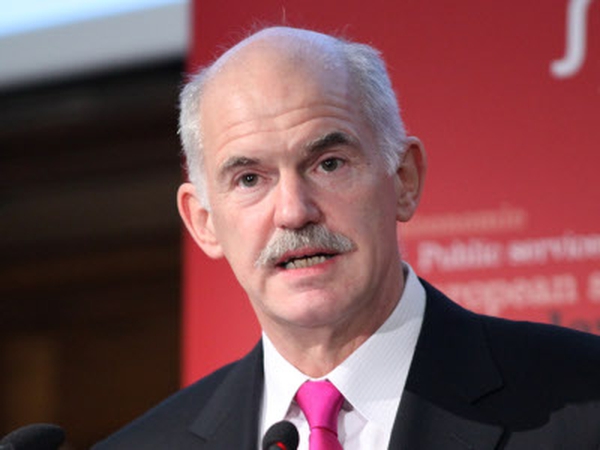