The deal involves a €110bn loan package for Greece over three years, with €80bn coming from the bloc and the rest from the International Monetary Fund.

Ireland will contribute up to €1.3bn to the bail-out package, Finance Minister Brian Lenihan said tonight.

Under the revised plans, Greece expects gross domestic product to contract by 4.0% in 2010, compared with a prior government forecast of a 2.25% drop. The economy is projected to return to growth in 2012 and not 2011 as previously anticipated.

Greek Prime Minister George Papandreou said the unprecedented bailout had been agreed to avoid bankruptcy, but that the country would have to make big sacrifices for the aid.

Finance Minister George Papaconstantinou told a news conference that the package, which will pave the way for a joint EU-IMF rescue expected to total up to €120 billion, foresaw new cuts in the budget deficit of €30 billion over three years, a higher figure than many had expected.

Forecast debt reduction was also more modest. Previous government forecasts had called for debt to peak at 120.6% of GDP in 2011. Under the new plans, it will continue rising for four years, peaking at nearly 150% in 2013.

Mr Papaconstantinou said the measures included a rise in VAT to 23% from 21%, a further 10% hike in fuel, alcohol and tobacco taxes and a further reduction in public sector salaries and pensions.

The government appears to have resisted demands for cuts in private sector salaries, which are more difficult for it to control.

Instead, it agreed to loosen firing rules which prevent companies from dismissing more than 2% of their workforce in a single month.

But the country's main public sector union ADEDY vowed to fight the measures, saying they would hit an already weak economy hard. ‘We will continue and we will intensify our protests,’ said Ilias Ilipopoulos, general secretary of ADEDY, which represents about 500,000 workers.

‘The government today announced the destruction of workers, pensioners and even the unemployed. It erased all hope for job opportunities and deleted the future of young people.’

Mr Papaconstantinou said the country had no other choice, saying Greeks must decide between ‘collapse or salvation’.

A meeting of EU finance ministers this afternoon is expected to give its go-ahead to the aid.

Greece and its international backers hope the deal can stem a crisis that has shaken markets worldwide, stoked fears of contagion to other euro zone members such as Portugal and Spain, and exposed deep divisions in the currency bloc.

Yesterday, thousands of people protested in the Greek capital over planned cutbacks. 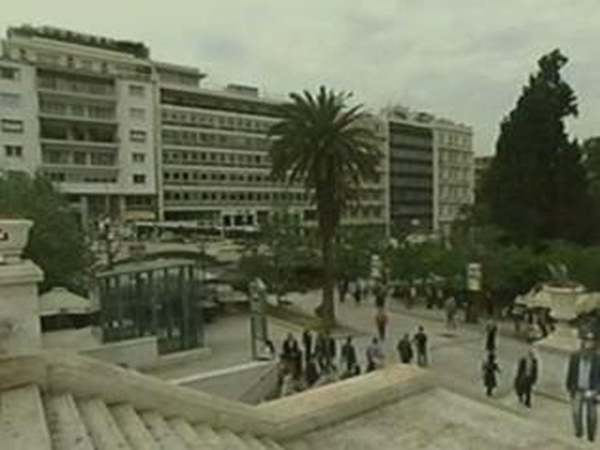