The latest KBC consumer sentiment index rose to 61.9 in March from 59.4 in February, suggesting a gradual, if uneven, improvement in the mood of consumers here.

The three-month moving average - which provides a better indication of the underlying trend - increased from 59.1 to 61.9. This is the strongest reading in two years, KBC notes.

KBC says the most negative aspect of the survey was a downgrading of the general outlook for the Irish economy. This may be due to ongoing worries about the health of the world economy with particular tensions centred on Greece and the euro zone.

However, the domestic concerns were also to the forefront as work stoppages in the public sector and estimates of the likely cost of getting the banking sector back on its feet hit consumers.

While consumers remain fairly downbeat about the general outlook for the Irish economy, the March results on economic prospects were stronger than any reading during 2008.

'Consumers are finding it difficult to decide whether they should be relieved that the worst is over or resigned that the future may not be that bright,' commented KBC Bank Ireland's chief economist Austin Hughes.

He points out that the weaker assessment of economic prospects was not accompanied by a downgrading of the outlook for employment. Despite a number of high profile job losses at the likes of Hughes and Hughes and Musgraves, there was also some job creation news last month at pharmaceutical firm PPD and Hewlett Packard.

The survey reveals that consumers were a little less concerned about their personal household finances and slightly more inclined to spend in March. KBC suggests that consumers who still have private sector jobs may be seeing some stabilisation in their wages after suffering large falls in 2009. It adds that the December Budget did not repeat the tax increases of the previous two Budgets.

The March survey also reported a strong improvement in the buying climate in the country. 'This may reflect some impact from the car scrappage scheme as well as an increased willingness to spend on home improvements or heavily discounted furnishing and electrical products,' Mr Hughes stated.

He says today's data point towards the possibility of a 'less awful' outlook for consumer spending than seemed likely a couple of months ago. 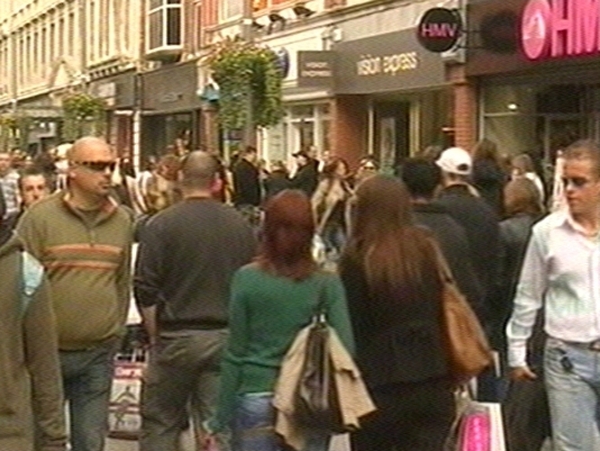