New figures show signs that the Irish economy remained weak in the third quarter of this year, even though gross domestic product actually grew slightly during the three-month period.

This sparked a debate about whether the country had come out of recession, as the technical definition of a recession is two quarters in a row of falling GDP.

The Central Statistics Office said the economy, measured by GDP, shrank at an annual rate of 7.4% in the third quarter, slightly less than the 7.9% drop in Q2.

GDP compared with the second quarter showed a small rise of 0.3%. But as GDP includes profits made by US multi-nationals based here, many economists prefer to focus on gross national product (GNP). This showed a quarterly fall of 1.4% and an annual drop of 11.3% in the third quarter.

A breakdown showed that consumer spending remained weak, with a fall of 7.3% compared with a year earlier, while capital investment slumped 35%. These falls were both bigger than in the second quarter. Industrial production was down 9.6%, with the construction part of this dropping by 34.4%.

But exports contributed €2.8 billion more to the economy than in the third quarter of last year, indicating a strong performance from multinational companies based here.

Separate CSO figures showed that the balance of payments current account deficit in the third quarter was €902m, down almost €2 billion from the €2.9 billion deficit a year earlier. The CSO says the reduction was mainly due to a €2.2 billion increase in the merchandise surplus because of a sharp fall in imports. The balance of payments measures flows of income into and out of the economy.

Recession 'easing but not over' - economists

Davy economist Rossa White - who focused on the GNP figures - said the economy remained in recession, and he did not expect GNP to start growing until the first quarter of next year.

He said the GDP rise over the three months was helped by the continuing strong performance of foreign-owned multinational companies.

Bloxham economist Alan McQuaid said the quarterly figures were relatively new and 'there appears a reluctance on the part of the Central Statistics Office to stand over the reliability of the numbers'. He said Irish analysts continued to focus on the year-on-year change in both GDP and GNP, which were down quite sharply again.

'Still, given that international commentators put so much emphasis on quarterly changes in GDP, we shouldn't downplay the Q3 increase too much, and in fact should take some consolation that on this basis, Ireland came out of recession ahead of the UK,' the economist said.

IIB economist Austin Hughes said the quarterly rise in GDP did not reflect the reality of drops in incomes and employment. 'The recession is easing, not over,' he added.

The economist said today's figures supported the view that the worst was over for the Irish economy, but they also hinted at a 'possibly protracted' bottoming out process. Mr Hughes said it may be some significant time before a palpable sense of an upturn becomes established.

Goodbody's Deirdre Ryan said today's data clearly indicated that a better than expected performance from multinationals was masking a very weak domestic environment, where there is still further weakness to come.

Ulster Bank said it was premature to use the data to declare that the recession has ended. It pointed out that a breakdown of the figures showed that every category of spending fell between Q2 and Q3. Spending by consumers fell by 0.7%, government spending was down 0.9%, investment fell by almost 10% while spending by foreigners on Irish exports was down 0.6%.

NCB also pointed out that there were large downward revisions to the Q2 figures. GDP was revised from flat to a 0.6% quarterly drop, while GNP was revised down by a full 1.2 points to show a 1.7% decline from Q1.

'Growth has returned thanks to net exports, but shrinking imports outpacing shrinking exports is not a sustainable way for an economy to boost employment, which is ultimately needed for a sustainable recovery,' it said.

ICTU's economic advisor Paul Sweeney said the deflationary impact of Budget 2010 meant the economy would continue to decline in 2010.

'With a fall in national income in the year to September of a massive 11.3% in GDP, there is only ice-cold comfort in hoping that because it is fractionally less than the decline of over 12% in the previous two quarters, the recession may be bottoming out,' he said. 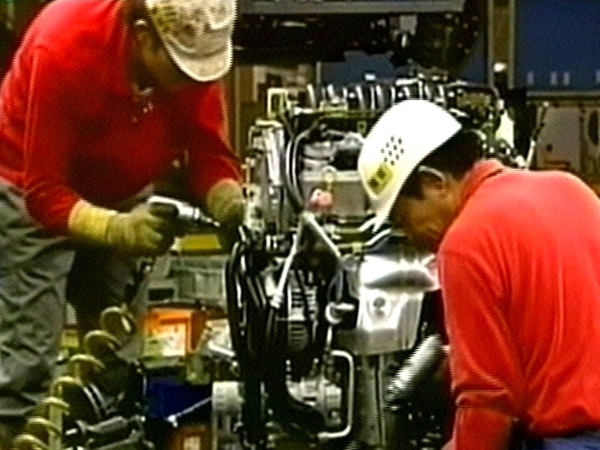