The Taoiseach and the Green Party leader have backed warnings about borrowing made by Finance Minister Brian Lenihan last night.

Brian Cowen said the gap in public finances between revenue and expenditure had to be stabilised. He said the current tax revenue was at 2003 levels, and there was a shortfall of €23 billion, which he said was 'not sustainable'.

The Minister for the Environment, John Gormley, said the Government would be introducing spending cuts in every single department in the Budget in December.

Last night, Brian Lenihan warned that the country would be on the road to ruin if the Government failed to reduce borrowing and stabilise the national debt. Today, Mr Lenihan said he would be discussing a proposal to cut ministers' salaries with the Cabinet in the future.

Speaking in Dublin last night, Brian Lenihan had said big cuts in ministerial and senior civil servants' pay were on the way. And he warned the cuts proposed by An Bord Snip Nua would be a picnic compared to what future governments would have to implement.

Speaking at the Dublin Chamber of Commerce annual dinner, the Minister said that if borrowing continued unchecked, two out of every three euro of income tax would go to service a national debt of €160 billion by 2013.

The minister said the top marginal rate of tax now stood at 52%, and pushing it higher would turn business away from Ireland. He said that - beyond a new carbon tax - he did not intend to increase taxes in the forthcoming Budget.

Mr Lenihan argued that the top 4% of earners paid 48% of income tax, and that there was no pot of gold that could be raided from the wealthy.

Speaking at the same event, businessman Denis O'Brien has said the best performing government agency is the Revenue. He said it was the model for all government departments for the way it had combined change, technology and efficiency.

He said they generally made a nuisance of themselves - which would be fine if 99% of them had not failed to predict the economic meltdown facing the country. He said the other 1% predicted doom all the time.

'I have a sense that all these economists need to come and work for real businesses to really understand how the economy works and see the actual stress and strain of running a business... only then will they have something to contribute,' he said. 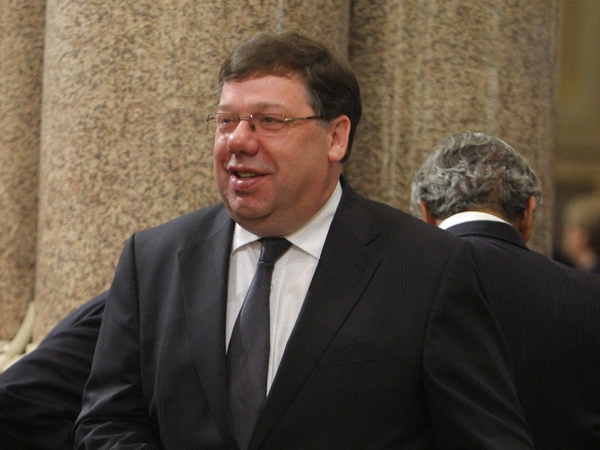