Anglo Irish Bank has reported a pre-tax loss of €4.1 billion for the six months to the end of March, due mainly to a charge of €3.7 billion for impaired loans. Anglo is also setting aside €0.4 billion for what it calls collective lending impairment charges.

The bank also said that the Government is to provide it with €4 billion of capital - subject to EU approval.

Finance Minister Brian Lenihan said it was 'important to remember that this is the first time we have put money into Anglo Irish Bank, although we signalled our readiness to do so last December before the bank was nationalised'.

Executive Chairman Donal O'Connor said that this has been a 'most difficult period' for the bank. He said the significant impairment charges on its loan portfolio comes after continued deterioration in the economic environment in each of its core markets and further declines in property values.

The bank is very conscious of its responsibility to the taxpayer,' Mr O'Connor said.
'Clearly the bank made mistakes in some of the lending decisions taken in recent years, particularly in relation to property development in Ireland,' he added.

'Our rate of growth and risk appetite at the top of the economic cycle was imprudent and the stark evidence of this is seen in the figures announced today,' he added.

The Anglo Chairman also said that the bank had been reviewing its strategic options over the last few months with the Finance Minister and his officials. They concluded that any wind-up option would be 'very costly' for the tax payer and that the interests of the Minister, as shareholder, would be best served by de-risking and stabilising the bank and for it to continue as a going concern.

To this end, Anglo said it would be co-operating fully with NAMA and will transfer its land and development book to the Government's so-called 'bad bank' scheme.

Anglo said the asset quality of its loan book has deteriorated substantially with impaired loans increasing to €10.7 billion and a significant increase in the specific impairment charge to €3.7 billion.

It also warned that its loan loss outlook until the end of September 2011 came to €7.5 billion. It added that is there was another 10% fall in land prices there could be a further impairment charge of €1.5 billion.

It also revealed in today's results that €308m has been provided against the loans to 'ten longstanding clients of the bank' or the so-called Golden Circle. It also said that €31m has been provided gainst loans to some former directors who held office during the six month period but who are no longer on the board.

Chairman Donal O'Connor said the bank will be seeking full repayment of these loans.

Today's half yearly results show that deposits from businesses in Anglo dropped by almost €9 billion after nationalisation.

New lending in the six month period was only to its existing customers, mainly in Ireland, and confined to amounts which were previously committed to or approved.

Anglo Irish Bank said that its development lending totals €17.7 billion or 24% of its loan book. Two thirds of this lending is in Ireland and covers all phases of development from unzoned land to completed units.

Detailing the quality of its loans, Anglo said the amount of loans classified as part due but not impaired has increased to €12.9 billion from €1.6 billion last September. Ireland accounts for 8.6 billion (67%) of the total past due amount, the UK 28% and the US 5%.

It said the level of loans past due outstanding for over 90 days has increased from €1 billion in September to €2.5 billion and represents the highest risk element of past due.

Anglo said that lower quality, but not past due or impaired cases totalled €5.3 billion at the end of March, up from €2.5 billion in September. The bank deem these loans to have a high risk of deterioration.

Finance Minister Brian Lenihan, commenting on the results, said they were very disappointing and reflected a marked deterioration in asset quality at the bank since it was nationalised in January.

Mr Lenihan said the main concern of the Government in relation to Anglo has been to protect the economy from the wider losses that would occur in the event of its failure, to protect the €64 billion of customer and interbank deposits in the bank and to prevent it becoming a systemic threat to the financial system.

Labour's Spokesperson on Finance Joan Burton said the results showed that the 'public's worst fears have been realised'.

She said the figures show that the situation at Anglo Irish is 'even worse than we had been led to believe' and called on Mr Lenihan to 'come clean' on how bad things really are at the bank.

The Director of Corporate Enforcement said today that his investigation into events at Anglo was complex but was proceeding well.

'The investigation is progressing satisfactorily, and the Office continues to work constructively with the bank, the financial regulator and other relevant parties in this matter,' Paul Appleby said.

Mr Appleby has been allocated extra staff by the Enterprise, Trade and Employment Minister for the probe. 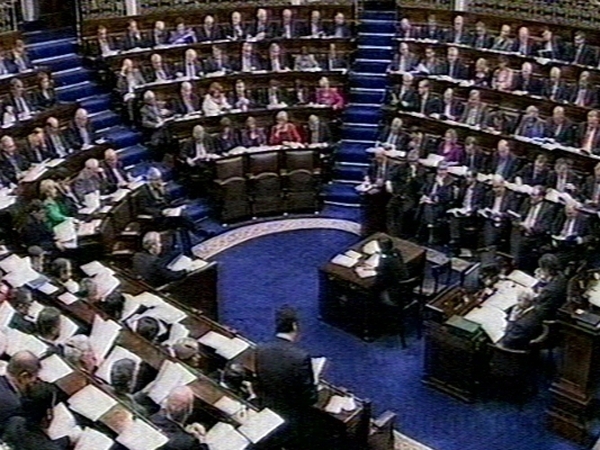