The Minister for Finance Brian Lenihan has said a decision by AIB to seek a further €1.5 billion in extra capital was taken after long and serious discussions with him over the weekend.

In a statement this morning to the Dublin stock exchange, AIB said it planned to increase its core one capital - a measure of its financial reserves - by €1.5 billion, in addition to the €3.5 billion injection from the Government.

Mr Lenihan said that a number of concerns arose as a result of an examination of the bank's position being undertaken by both the Government and the bank itself.

The Minister said nationalisation of AIB had to be a last option. He said the key issue for the banks was to raise funds abroad and their presence in the marketplace was important to enable them to do this.

AIB said potential sources of its additional €1.5 billion in capital included the disposal of assets. It also said that any further injection of cash from the State would be in the form of equity capital.

'Following discussions with the Minister for Finance and reflecting his desire to ensure that systemically important banks would remain adequately capitalised, even in stressed scenarios, we have decided to take further action to strengthen our capital position,' the statement said.

AIB said that arising from stress tests conducted by Finance Minister Brian Lenihan, both the bank and Mr Lenihan decided that a total amount of €5 billion new core tier one capital is 'appropriate'.

The bank also said it welcomes the move by the Government to set up the National Assets Management Agency. It added that it will work closely with the authorities to achieve its implementation.

The bank will hold its EGM on May 13 at which shareholders will vote on accepting the €3.5 billion Government injection.

A note from Bloxham Stockbrokers this morning said that the direct implication of the statement is that AIB will put its stake for M&T in the US and Bank Zachodni in Poland up for sale. The combined stakes have a value of about €2 billion at current prices.

Earlier, a statement from the Department of Fiannce said the Minister would continue his due diligence process until the recapitalisation of AIB in mid-May and that he had no reason to anticipate that any further problems would emerge.

Similar stress test scenarios for Bank of Ireland were also carried out and the department said they did not indicate a need for any further capital beyond the €3.5 billion already invested in the bank.

AIB shares closed up two cent to stand at 88 cent in Dublin.

Meanwhile, members of the IBOA union in AIB have voted to reject the bank's latest proposals on pay, pensions, job security and other issues. A union statement said members had backed a proposal by its executive committee to refer the issues to an agreed third party for mediation.

'The outcome of the ballot reflects the deep sense of upset and anger among staff at the bank's opportunistic proposals,' said IBOA general secretary, Larry Broderick. 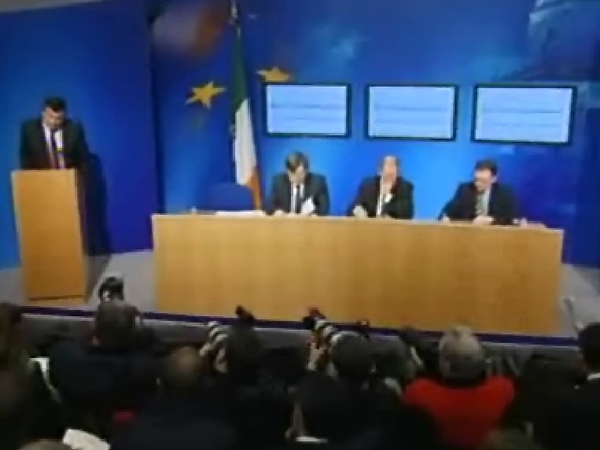 AIB and Bank of Ireland both get €3.5 billion