The European Central Bank is expected to cut its key interest rate to an all-time low tomorrow and may venture onto entirely new ground as it seeks ways to ease a deepening recession.

Analysts said that it is already clear to everyone that euro zone rates will go lower but not much lower than the current level of 1.5%. They said the focus has now shifted to the type of other unconventional measures the ECB is ready to embark on.

Efforts to pull the 16-nation euro zone out of its first recession are set to take the ECB further into murky waters called quantitative easing, essentially the creation of money to boost economic activity.

The US Federal Reserve, Bank of England and Bank of Japan have blazed a trail by unveiling schemes costing trillions of dollars to buy government and corporate debt and high-risk, mortgage-backed securities.

The ECB, however, has focused on the euro zone banking sector, which handles business financing on a much greater scale than elsewhere.

The central bank's first move now is almost certain to be a doubling of the maturity of refinancing operations, which provide unlimited funds to commercial banks at fixed rates, to one year from six months.

A serious hurdle to boosting euro zone activity is a credit squeeze brought on because banks still do not trust each other nough to lend large amounts of cash over relatively long periods. Unlimited central bank funds with a one-year maturity would ease the banking sector's need for cash.

Euro zone economic perspectives have turned increasingly gloomy since late 2008 when the world was rocked by US investment bank Lehman Brothers' collapse.

The ECB surprised markets last month when it slashed its 2009 euro zone forecast to a contraction of 2.7% but since then analysts have said the economy could in fact shrink by 4%.

European consumer and business confidence slumped to its fourth record low in a month in March although the pace of decline slowed in a possible sign of stabilisation, an EU survey showed earlier this week.

Inflation has also plunged meanwhile, hitting a record low of 0.6% in March, far below the ECB's target of just under 2%. The drop brought 12-month euro zone inflation to the lowest point on records going back to 1996 and gave the bank leeway to cut interest rates further.

The ECB would rather not cut its main interest rate too low however because the lower it goes, the less traction it gets. ECB president Jean-Claude Trichet said in March that the governing council saw 'a number of drawbacks associated with the zero rate level' other central banks have embraced.

But Trichet also stressed that the ECB's 'hands are not tied' and ruled nothing out with respect to 'non-standard' measures to boost the economy. 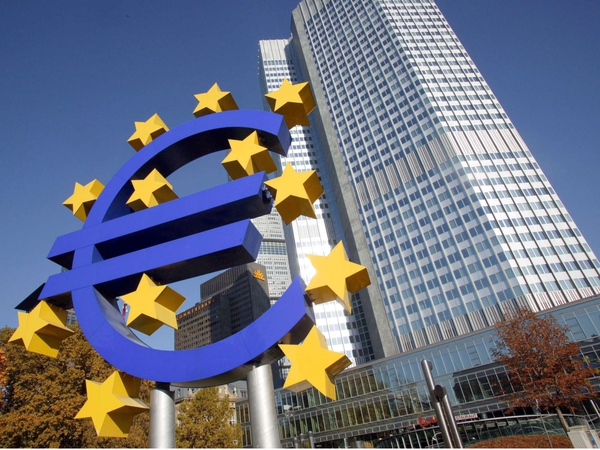