Finance Minister Brian Lenihan has said the hole emerging in the public finances is of the order of €3.5 billion to €4.5 billion.

He said this was a very serious situation for the country, as the Government had set itself a definite limit on borrowing for this year, which it has to stick to.

In framing the supplementary budget, he said the Government would review all its options. If tax revenue is below expectations then revenue raising measures would have to be looked at, he said.

If expenditure is not being contained, containment measures would have to be considered, he added. He said the supplementary budget would be drawn up in the context of a wider plan to stabilise the public finances and give hope to the economy.

He said no decisions have been taken by the Government on where spending cuts might fall. The normal position of Government, he said, would be to examine everything.

Questioned about whether mistakes made by previous Government had exacerbated the problems, Mr Lenihan said mistakes were made by Governments, by borrowers, by lenders throughout the world and here in Ireland.

But the fact is, he said, that we have to deal with the situation now, and that situation is unsustainable.

He also said that any proposals put forward by the Opposition would be taken account of and costed.

Earlier, speaking on RTE Radio's News at One, the Minister said that taxation and spending measures to be announced shortly would be part of a 'definite and credible plan' that will cover 2009, 2010 and 2011.

Mr Lenihan said the projected tax shortfall was a significant problem, but it was absolutely necessary to restrict borrowing. The Minister said it was essential that any measures introduced safeguarded employment.

On the same programme, Fine Gael finance spokesman Richard Bruton said a comprehensive approach was needed, but the Government had to take the opportunity of making serious reforms.

Earlier, the Taoiseach confirmed in the Dáil that a supplementary Budget would be brought to the House by the first week of April. He was responding to the Labour leader, Eamon Gilmore, who repeatedly asked him when the Budget would be.

Opposition parties were also briefed by Department of Finance officials on the state of the public finances in a meeting this morning. It is understood representatives of Fine Gael, Labour and Sinn Fein were present at the briefing.

Yesterday the Government invited the opposition to make detailed submissions on what should be contained in the upcoming emergency Budget.

There have been calls in the Dáil on the Minister for Finance to make public the findings of the committee who were asked to report on capping bankers' pay.

Responding, Brian Lenihan said he could not do so, as the report had to go before the Cabinet first. He also said that the basis of the report - which he received yesterday - is 'scientific and not populist'.

Legislation has been passed in the Dáil tonight which would allow the Government to divert money from the National Pensions Reserve Fund to the recapitalisation of the two main banks - AIB and Bank of Ireland.

Earlier an opposition motion to cap bankers' pay was defeated.

The legislation will go the Seanad tomorrow. 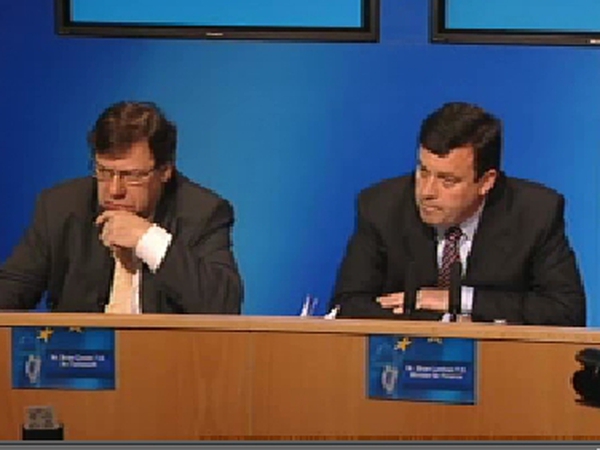