The Board of Aer Lingus has rejected a new Ryanair offer to buy the airline, and says it remains a strong business. Aer Lingus added that the €748m takeover offer from its rival significantly undervalues the airline.

The figure offered by Ryanair, which already has a near 30% stake in Aer Lingus, is just half of what it offered two years ago in an approach thwarted by European regulators.

In a statement released this evening, Aer Lingus advised its shareholders ‘to take no action in relation to the offer’.

In a surprise move announced to the Irish Stock Exchange this morning, Ryanair said it is offering €1.40 per Aer Lingus share. It already owns 29.82% of the former state carrier.

An earlier takeover bid by Ryanair for the airline was blocked by the European Union on competition grounds.

It says it wants to merge the two airlines into one strong Irish airline group under common ownership similar to recent mergers in Europe such as Air France/KLM and Lufthansa/Swiss .

It says that both airlines will operate as separate companies with separate brands.

Ryanair says that it the offer is successful it will double the size of the Aer Lingus short haul fleet from 33 to 66 planes over the next five years. It also promises 1,000 new jobs.

Ryanair says that over the past two years, the trading environment for all European airlines has deteriorated dramatically as a result of high oil prices and the global recession. It points out that over 30 airlines have failed this year.

Flood of airline bankruptcies and consolidations

'The world has changed dramatically over the past two years, as high oil prices and deep recession have caused a flood of airline bankruptcies, consolidations and capacity cutbacks. Aer Lingus, as a small, stand alone, regional airline has been marginalised and bypassed as most other EU flag carriers consolidate,' he added.

He said that the airline has requested early meetings with the Ministers for Finance and Transport, the board of Aer Lingus and the airline's ESOT trustees to discuss the latest move.

Aer Lingus floated on the Dublin stock exchange in 2006 and within days Ryanair began snapping up shares before going public with its takeover interest.

SIPTU has described the merger proposal as another attempt at 'mischief making'.

Next move up to Aer Lingus board - Dempsey

Transport Minister Noel Dempsey says any decision in relation to the Ryanair bid for the Government's shareholding in Aer Lingus will be taken in line with the State's aviation policy.

However, Minister Dempsey said the Government would wait until it had received an actual bid rather than today's announcement which he said was merely a statement of intent.

The Minister said the Government is free to sell or to keep its 25% shareholding in the company just like any other shareholder.

Speaking in Dublin this morning, he said it was up to the board of Aer Lingus in the first instance to look at any offer that might be made. 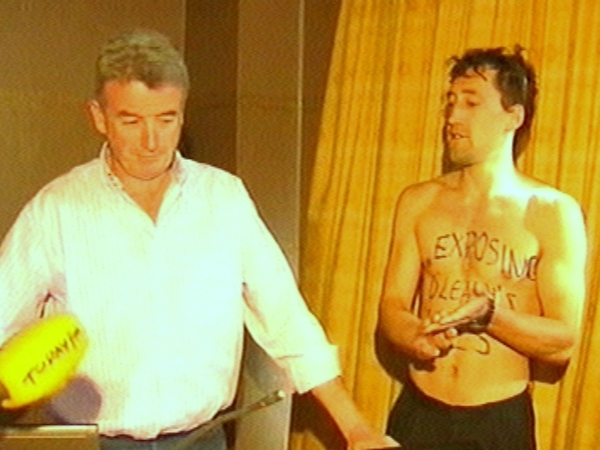 Ryanair could break even on oil drop