A new levy of between 1% and 2% on all incomes is one of the main measures announced by Minister for Finance Brian Lenihan in his first Budget.

The Minister told the Dáil the Government faced difficult choices, but was guided by principles of fairness. He said we must bring order to the public finances over the next three years.

Excise duties on cigarettes, wine and petrol are all increasing, as are DIRT rates, motor tax and VAT. The standard rate of VAT goes up by half a percentage point to 21.5%, while DIRT rises three points to 23%.

The Minister announced the abolition of the automatic entitlement to a medical card for the over-70s and limitations on entitlements to child benefit and childcare supplement. There is also a two €200 levy on employer-provided parking spaces in urban centres. There is to be a cull of 41 state agencies and bodies and a slowdown in decentralisation.

But old age pensions are up by €7 a week, while other benefits rise by smaller levels.

And, in what is likely to be a popular move, Ministers and Ministers of State are taking a 10% pay cut.

The Minister said he expected the economy to shrink by 1.5% next year, as measured by GNP, with GDP contracting by 0.75%. He said unemployment would rise to 7.3% but inflation would ease to 2.5%.

He said there would be a Budget deficit of 6.5% of GDP next year, well above the EU limit of 3%. The Minister said this was the maximum reduction that could be achieved this year, but it was his intention to lower this further.

Current spending will rise by 1.8%, with a current deficit of just over €4.7 billion and a capital deficit of €8.7 billion. 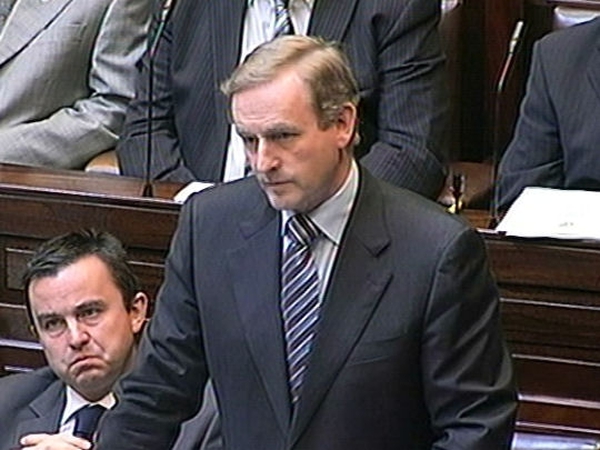