A threat by France to torpedo a new global trade deal has deepened the gloom surrounding World Trade Organisation negotiations in Geneva.

Four days of gruelling talks have produced little sign that an agreement is within reach.

French President Nicolas Sarkozy warned that Paris could sink the whole Geneva exercise. 'At the WTO, this agreement which is on the table, if it is not modified, then we will not sign it,' he said in France, referring to a draft agreement under discussion at the talks.

The draft agreement is a mere starting point for talks, but Sarkozy's comments reflect deep anxiety and opposition in France to concessions that would damage its farming sector.

Meanwhile, Irish Government Ministers say they have have been engaged in 'robust' negotiations to defend Irish interests. They say their meetings provided opportunities to consistently highlight Ireland's 'very real concerns on agriculture' while working for positive outcomes on manufacturing industry and services.

Tánaiste Mary Coughlan said progress on talks about trade in manufactured goods (NAMA) was proving to be difficult but what was good in NAMA was good for Irish industrial employment. She said lower tariff costs could inject real gains into the Irish economy and address the issue of inflationary pressures.

35 leading trade negotiators are meeting with the aim of mapping out a deal to conclude the long-delayed Doha Round of global trade talks.

The Doha Round began seven years ago with the aim of helping poor countries but has been delayed by disputes between the rich developed world and poorer developing nations over cutting subsidies and tariffs.

'On some of the key issues, positions still remain too far apart,' WTO Director-General Pascal Lamy conceded at a meeting of the organisation's 153 members, his spokesman told reporters.

Any final deal, if approved by negotiators, would then be proposed to all 153 WTO members which would have to ratify it individually.

After meetings of 35 invited delegations failed to deliver progress early in the week, Lamy has concentrated his efforts on trying to get a smaller group of seven leading trade powers to find common ground. Only the US, the EU, Japan, India, Brazil, Australia and China were involved in talks until the early hours of this morning, which drew complaints from smaller nations.

European Trade Commissioner Peter Mandelson shrugged off the threat from Sarkozy, reminding the French leader that the Commission held a mandate agreed by each member state to negotiate on behalf of the EU. 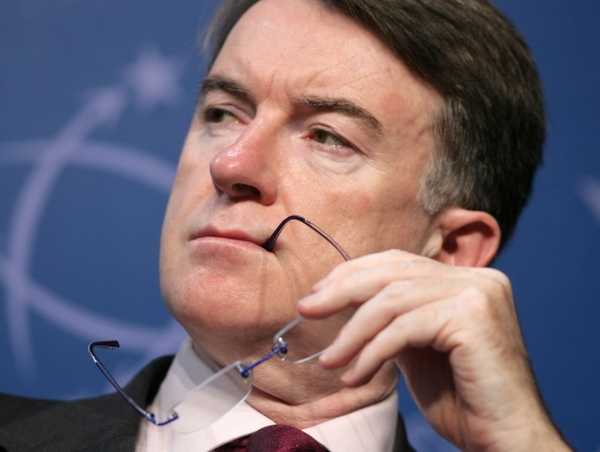