The Commission for Aviation Regulation has said it is unlikely that any passengers will be entitled to financial compensation arising from the current situation at Dublin Airport.

The Commission said this was because of the extraordinary nature of the circumstances. The regulator has issued a statement advising passengers delayed at Irish airports because of the radar difficulties that they have certain entitlements under European legislation.

Passengers are being advised to claim their entitlements from their airline in the first instance. Those whose flights are delayed for more than two hours, or totally cancelled, are entitled to a range of provisions including free food, refreshments, accommodation or a refund or re-routing.

Listen to advice for passengers from the European Consumer Centre and Commission for Aviation Regulation.

Meanwhile, the radar system at Dublin Airport remains stable 24 hours after after it was restored to 70% capacity. The knock-on effect is still being felt by some air passengers, with some flights continuing to experience delays.

Dublin Airport Authority today doubled its staff numbers to deal with increased passenger numbers. It is advising passengers to check their flight details before flying.

Meanwhile, Transport Minister Noel Dempsey has defended the Irish Aviation Authority's handling of problems at Dublin Airport, saying it was its responsibility to ensure the safety of passengers in the air, and that other bodies were responsible for giving information to passengers on the ground.

But he told the Dáil that he agreed that information should have been more forthcoming.

Responding to a call from Labour's Tommy Broughan to ensure that the IAA compensated passengers fully for the situation, the Minister said it was up to individual passengers to seek compensation, and he was not going to give a commitment on that issue in the Dáil. 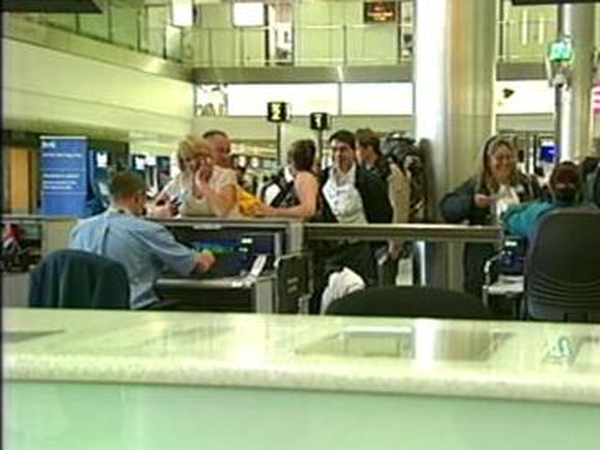