There was an Exchequer deficit of just over €1.6 billion last year, three times the figure which the Government had projected.

The fall in the economy's tax take compares to a surplus of more than €2.6 billion recorded in 2006, when the property market was booming.

Stamp duty receipts for last year were more than €700 million below what had been forecast a year ago, while VAT receipts were almost €400m below expectations.

Today's tax receipt figures represent a significant shortfall on the amount of money the Government thought it would have available to it when it was doing its spending sums for 2007, 13 months ago.

Essentially, the Government has spent €1.6 billion more than it took in from taxes last year, forcing it to borrow to make up the shortfall.

The underlying reason is the stagnating property market. Over the last number of years, property taxes have bloated Government revenues, freeing up billions for spending on health, education, social welfare and infrastructure.

On the plus side for the Government, the level of the shortfall is €150m less acute than the €1.75 billion projected by the Department of Finance just before the December Budget.

Meanwhile, the total amount of income tax collected, while slightly less than forecast, is still almost 10% up on 2006 levels at almost €13.6 billion.

The Tánaiste and Minister for Finance, Brian Cowen, expressed satisfaction with the figures.

'The year on year increase in tax revenue was 3.8%. This was below the original expectations for 2007, mainly due to developments in the property market.

'However, the growth in income tax receipts, up by about 9.5% over 2006, points to sound economic activity and tallies with expectations of income and employment growth in 2007,' he added.

Mr Cowen also defended the need for increased borrowing, saying: 'The nation's debt now represents about 25 per cent of our income compared to approximately 65% ten years ago. This is one of the lowest in the euro area.'

The Labour Party, however, criticised the Government over the annual statement, claiming its revenue situation 'worsens by the month'.

In a statement, the party's Deputy Leader and Spokesperson on Finance, Joan Burton, said: 'These are some of the most worrying Exchequer figures for more than a decade, with steep falls in the growth in tax revenues, and increases in Government borrowing.' 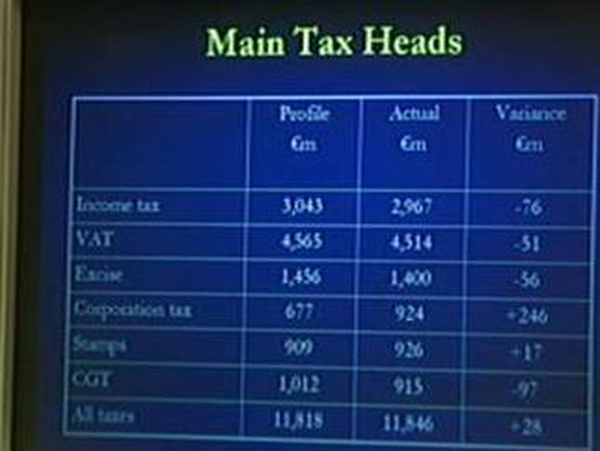