Shares in Anglo Irish Bank closed over 10% in Dublin this evening after it reported pre-tax profits of just under €1.25 billion for the year to the end of September, up 46% on the same period last year and the first time the figure has topped €1 billion.

The results and accompanying comments from the bank appeared to reassure investors concerned about the effects of the recent crisis in credit markets on banking profits.

Net lending to customers was up 37% to €67.1 billion, while the amount of lending in the pipeline was €9.8 billion.

Anglo Irish chief executive David Drumm told RTE radio that the 37% lending growth this year would moderate next year, and the longer-term sustainable growth rate for the bank was 15-20%.

On the current crisis in the financial markets, Mr Drumm said the practice of spreading risk by parcelling out pieces of debt was a risk, and Anglo operated in a different way and looked at every loan individually.

He said the bank had taken a €67m impairment provision, which he described as a prudent measure to cover its exposure to structured investment vehicles (SIVs), which had been hit by the problems in credit markets.

Mr Drumm said the bank had 'a resilient funding platform, excellent liquidity and capital strength', adding that underlying earnings growth was expected to be over 15% in 2008.

Referring to the turmoil in financial markets, Mr Drumm said the bank had been prudent, and had a low level of bad loans - just 0.5% of total lending. 'The bank does not engage in speculative development lending,' he added.

In a statement accompanying the results, Anglo chairman Sean Fitzpatrick said that while it was hard to predict when the current problems in financial markets would settle, the forthcoming releases of full-year results from banks would be 'an important step in this direction'.

He added that while economic growth in its markets would ease, this would be partly offset by a more benign outlook for interest rates. 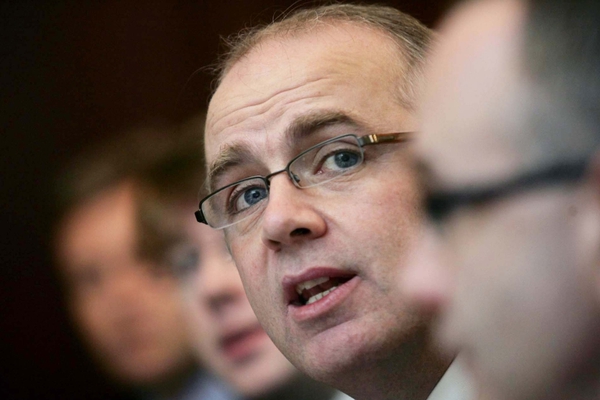