Minister for Finance Paschal Donohoe has introduced the largest Budget in the history of the State aimed at tackling what he described as the "invisible enemy" of Covid-19.

Businesses hit by restrictions will get rebates along with measures for the hospitality sector and homebuyers.

The first Budget of the coalition Government, which also includes €4bn for the health sector, has been framed by the pandemic and the prospect of a no-trade deal Brexit.

Here are some of the main measures announced: 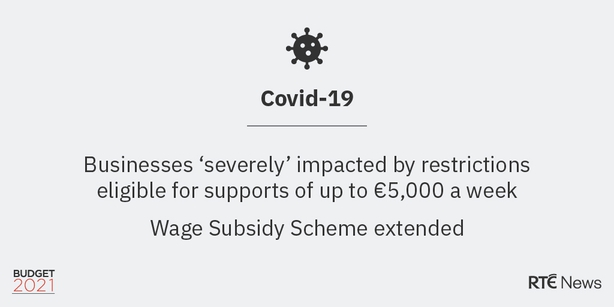 Minister for Finance Paschal Donohoe said overcoming the challenges of the pandemic is the central task for the Government.

In Budget 2021, €8.5bn has been allocated for public services to address the challenges of Covid-19, including €2.1bn in contingency funding.

The Employment Wage Subsidy Scheme is to continue until 31 March 2021, while the Government says a similar scheme will be needed for the remainder of the year.

Minister Donohoe said decisions on the extension will be made when economic conditions become clearer.

There will be a new scheme of targeted support for businesses significantly affected by Level 3 or higher restrictions. The Government will make a payment based on 2019 average weekly turnover and it will be effective from today until 31 March, with a maximum payment of €5,000 per week.

Workers can claim remote working-related tax deductions for broadband expenses and other vouched expenses wholly for their employment.

An additional €10m was announced for the Covid-19 stability fund for community and voluntary organisations, charities and social enterprises.

Minister for Public Expenditure and Reform Michael McGrath announced €500m in additional expenditure measures this year to support businesses and communities and a further commercial rate waiver in the final quarter of 2020 at a cost of €300m.

Portions of the €1.1bn in funding for the Department of Enterprise, Trade and Employment will be used to support SMEs through local enterprise offices and Enterprise Ireland, fund research and development under the Covid products scheme and the implementation of the Credit Guarantee Scheme and the Future Growth Loan Scheme. 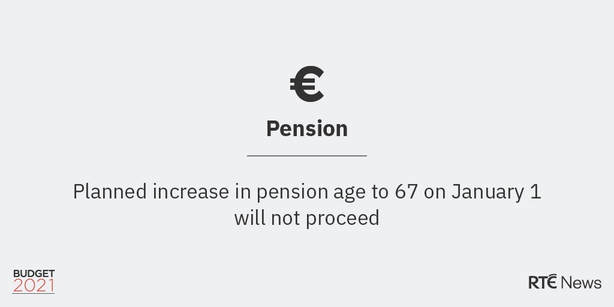 The planned increase in pension age to 67 will not go ahead on January 1 and a commission will examine the issue. 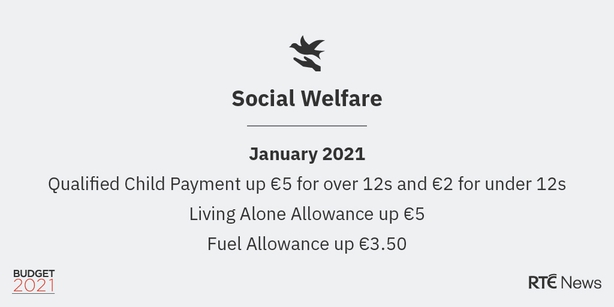 On an unspecified date in 2021, the parent's benefit will be extended by three weeks.

Self-employed people can take up intermittent work without losing their Pandemic Unemployment Payment through an earnings disregard system.

The Christmas bonus will be paid for all social welfare recipients and most PUP recipients. For this year only, the 15-month requirement will be reduced to four months.

Families with caring responsibilities will see the dependent relative tax credit increased by €70 to €245.

There will be funding for the Department of Employment Affairs and Social Protection to support incomes for at least 370,000 job seekers in 2021 and a further 350,000 on Employment Wage Subsidy Schemes. 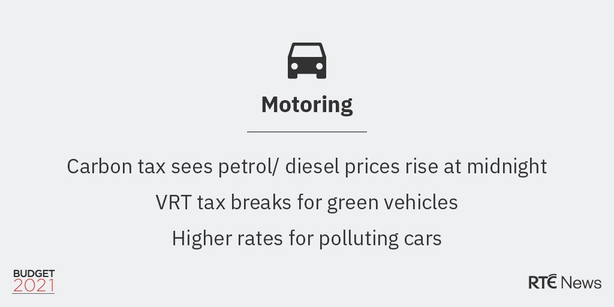 The green tinge in the Budget comes in the form of a carbon tax rise and VRT changes.

For drivers, the carbon tax rise means fuel prices will go up from midnight.

There will be tax breaks for green vehicles and higher VRT rates for polluting cars.

VRT relief for plug-in hybrid and electric will expire. VRT relief will be tapered for battery electric vehicles.

Used vehicle imports subject to weaker emission tests will have CO2 values uplifted equivalent with the world harmonised light-duty vehicles test procedure, which will also form the basis of a new motor tax table for vehicles registered after 1 January 2021. 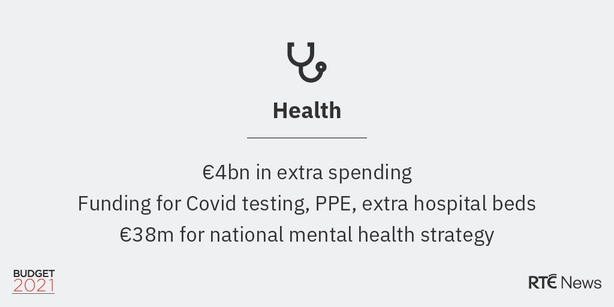 There will be an additional €4bn for the health service in 2021. This will include funding for capacity for 100,000 tests a week, allow for the purchase of PPE, and build up permanent hospital capacity.

There will be an additional 1,146 acute beds, an increase in permanent adult critical beds from 255 to 321 by end of 2021, 1,250 community beds (including 600 new rehabilitation beds), and five million additional home care hours.

There will be an accelerated implementation of the national cancer strategy, national maternity strategy and national trauma strategy.

There was €5m announced for community-based dementia supports.

There was €50m announced for new drugs schemes, and €25m for Healthy Ireland and the national drugs strategy was also announced.

There will be 100,000 additional inpatient and daycare procedures through investment in public hospitals and utilisation of the National Treatment Purchase Fund.

The Budget saw €100m provided for new disability measures, which will include for approximately 1,700 school leavers, the resumption of day services and increased personal assistant hours supported by 16,000 additional posts across the health sector.

The minister announced €38m for the national mental health strategy. 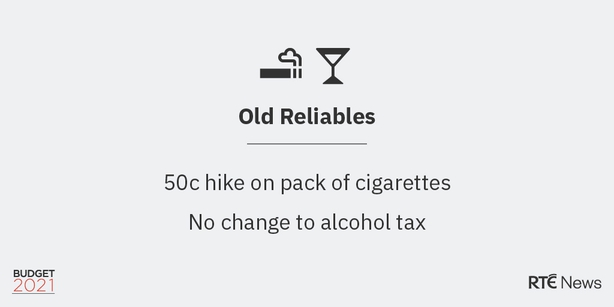 Excise duty on a pack of 20 cigarettes will rise by 50 cent with a pro rata increase on other tobacco products. The price of cigarettes in the most popular price category will be €14.

There is no tax increase on alcohol.

There have been no major changes to personal taxation on income.

The Budget is framed on the basis of no bilateral trade deal between the EU and the UK.

The department estimates that the absence of such a deal will reduce Irish growth by just under 3% in 2021, with an expected growth of 1.75%.

€340m in voted expenditure will be spent on Brexit supports, including the recruitment of 500 additional staff for operational checks. 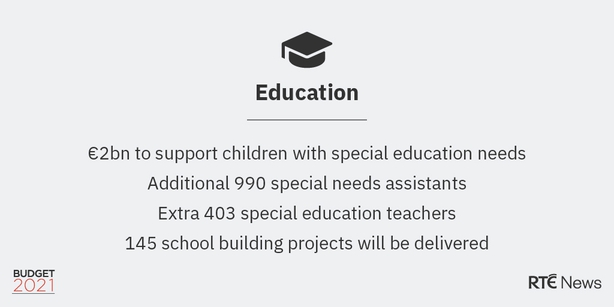 For the remainder of this year, Minister McGrath announced €80m to support school building, ICT infrastructure, and minor work schemes.

There will be supports for more than 10,000 upskilling and reskilling initiatives, including 1,500 retrofitting courses

The Department of Education will receive €9bn in funding, including €2bn to support children with special educational needs. This will involve 900 new SNAs and 403 additional teaching posts.

There will be a reduction of the pupil-teacher ratio to 25:1 as part of the provision of an additional 565 teaching posts.

Department of Further and Higher Education, Research, Innovation and Science will receive €3.3bn in 2021 including approximately 5,000 new places.

The SUSI grant for postgraduate study will be increased to €3,500 and the income eligibility for the grant will be adjusted. There will also be a one-off funding of €50m for extra supports for third-level students.

There will be a sustained multi-annual large scale home building programme as part of €5.2bn funding for the Department of Housing, Local Government and Heritage.

An extra €500m will be directed towards capital expenditure and facilitate the construction of 9,500 social housings units in 2021. There will be a total of 12,750 units added to social housing stock when leased units are included.

There will be a total of €65m available to fund deep retrofitting of the social housing stock.

There is a current expenditure allocation of €2.4bn in 2021 to support an additional 15,000 HAP tenancies, and 800 rental accommodation scheme tenancies.

There is an allocation of a package worth €110m for 2021 to provide for affordable housing and cost-rental schemes. The Serviced Sites Fund and Local Infrastructure Housing Activation Fund will progress delivery of more than 2000 affordable homes

The Land Development Agency will have €1.2bn of funding to deliver nearly 9,000 affordable housing and cost rental units in the coming years.

€210m is being made available for lending under the Rebuilding Ireland home loan scheme.

The Government says it is committed to the country becoming climate neutral by 2050.

There will be an extension to capital allowances schemes for energy efficient equipment for a further three years and the criteria for the scheme will be reassesed in the coming year.

There will be €29m in funding to protect biodiversity and maintain heritage sites.

€100m in carbon tax revenues will be provided for investment in the energy efficiency of homes.

As per the July Stimulus, the standard VAT rate reduction form 23% to 21% will run until 28 February.

A reduction in the VAT rate for the hospitality and tourism sector will come into effect from 1 November. This will reduce the rate from 13.5% to 9%.

€1.8bn to the Department of Agriculture will include funding for controls for agri-food imports and exports in relation to Brexit.

Construction on a range of major road projects will be provided for including the N56 in Donegal, the N4 in Sligo, the N22 and Dunkettle Interchange in Cork.

There will be 41 additional intercity rail carriages and the potential of up to 600 electric carriages as part of DART Plus.

€132m in funding for the National Broadband Plan was also announced.

There will be a €10m provision to address challenges at Cork Airport and Shannon Airport.

€341m will be provided to the Department of Rural and Community Development, including investment in broadband connection points in towns and villages.

The allocation of an additional €1bn in 2021 for public transport will fund progress on Metrolink, the Dart expansion, as well as bus and rail services throughout the country.

In terms of an all-island economy, €500m will be provided to the new Shared Island Unit in the Department of an Taoiseach over five years for key cross border infrastructure projects.

There will be an extra €7.5m provided for an expansion of the garda fleet, the continuation of hire of vehicles and telecommunication improvements.

An additional €147m will be allocated to the justice sector in 2021, including funds for up to 620 new garda recruits and 500 staff for administration roles, and funding for the Stardust inquest.

Meanwhile, capital expenditure in the Department of Defence will increase by €131m.

The film sector will get an extra year at the peak rate for the Section 481 tax credit, while there will also be a tax credit for the digital gaming sector from January 2022.

There is additional funding of €14m for the Gaeltacht and Irish language sector with a total allocation of more than €78m.

€50m will be given in supports for the live entertainment sector and Arts Council Funding will be increased by €50m to €130m.

There is a €36m increase for Sport Ireland funding, a €7m for large scale sports infrastructure, and €2m for major sporting events. 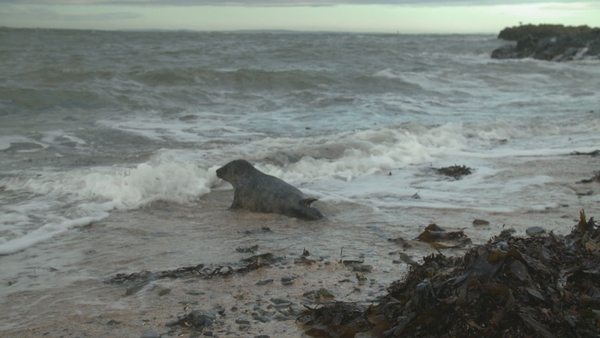 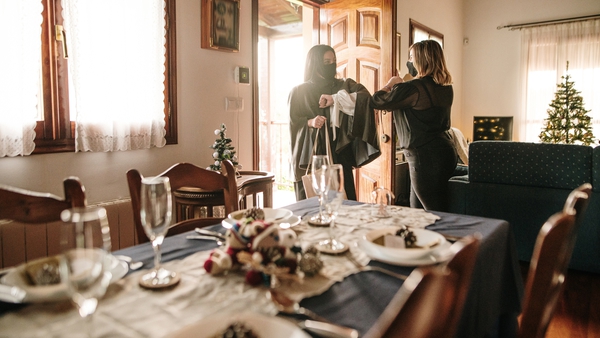 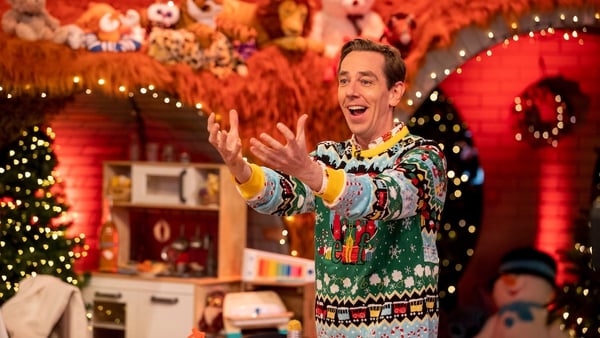 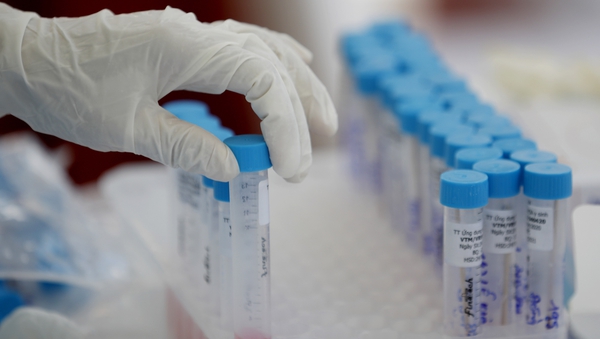