A report on the Northern Ireland Protocol from Britain's House of Lords has urged the UK and the EU to urgently restore trust between the two sides, in order to seek solutions to the problems that have emerged since the UK left the European Union.

The report warns that failure to do so means Northern Ireland is destined to become a casualty of the post-Brexit deterioration in relations between Brussels and London.

It said there is no doubt that Brexit and the Protocol have had a destabilising effect on the political situation in Northern Ireland, and on community relations.

The British government's failure to spell out clearly what the Protocol would mean in practice, it says, has led to businesses being unprepared for its implementation, which it says came as a shock.

In more criticism of the British government’s actions since the start of the year, the report says "the Government’s actions in relation to the Protocol, including unilateral extension of grace periods and a perceived failure to implement previous agreements reached in the Withdrawal Agreement Joint Committee, have been regarded as provocative by the EU, and have contributed to a lack of trust and cooperation between the two sides."

It continues: "The UK government has argued that its actions were necessary in the interests of the people and businesses of Northern Ireland. However, in order to maximise the prospect of the EU taking a flexible approach to the implementation of the Protocol, the government needs to rebuild trust by demonstrating its good faith. This requires open and constructive engagement, meetings its legal obligations and fulfilling its outstanding political commitments".

The Lords report accuses the EU of failing to account for the political impact on Unionists and Loyalists in its use of the Protocol to protect the Single Market.

The report says: "The unionist and loyalist communities are deeply concerned that Northern Ireland’s place within the United Kingdom has been undermined by the Protocol. Yet the violent unrest seen in late March and early April 2021, while arguably triggered by the Protocol, was also an expression of wider dissatisfaction with the political process and a perception that some voices in Northern Ireland are not listened to.

"This sense of alienation has been a factor going back many years, and has multiple causes, including the lack of access to employment, skills and investment opportunities within communities that are among the most economically deprived in the UK".

It says the Irish Government has a role to play in helping to inform EU opinion on political opinions in Northern Ireland, and urges it to consult more widely with the Unionist and Loyalist communities. 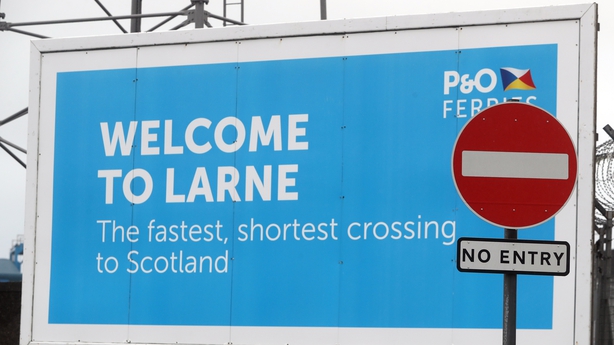 Writing of the dissatisfaction with the Protocol in Northern Ireland, the report states "this dissatisfaction is exacerbated by the pervasive sense that the Protocol creates a democratic deficit, in that significant aspects of EU law with wide- ranging political and economic implications apply to Northern Ireland subject neither to UK Government participation in the EU institutions, nor to consent from parliamentarians either at Westminster or Stormont.

"While there are mitigating steps that can be taken, there is no apparent way to eliminate the democratic deficit. We intend to return to this issue in the coming months".

It says both sides are under an equal obligation to find resolutions within the protocol to provide stability and certainty to businesses and people in Northern Ireland, and says trust must be urgently restored to repair the damage caused to relations across these islands over the past five years.

It says the main commercial benefit of the Protocol is that Northern Ireland is the only place where businesses can operate without customs declarations, rules of origin certificates or non-tariff barriers to both the British and EU markets.

It supports the idea of an SPS or food and veterinary agreement between the EU and UK as being the best way to deal with much of the checks and paperwork required under the protocol. It recognises the two opposing views on how such an SPS agreement should work, but urges the two sides to find a compromise.

It says "an SPS/veterinary agreement of any form is manifestly in the interests of Northern Ireland, and the failure to reach it suggests that political and economic stability in Northern Ireland is a lower priority for the EU than the protection of the Single Market, and a lower priority for the UK Government than regulatory sovereignty and the integrity of its trade policy".

Writing of possible solutions to the Protocol problems that have been put forward by witnesses who appeared before the Committee, including provisions in UK law, a new UK-Irish treaty, customs derogations or a model of mutual enforcement, the report says "while such suggestions should be taken seriously, they all present their own challenges. A consensus has yet to emerge behind any alternative, notwithstanding an intensive search for solutions in the five years since the referendum."

"We invite those opposed to the Protocol in principle to submit proposals for a comprehensive practical alternative consistent with the method of Brexit (with no alignment to EU trading or customs rules) adopted by the Government, or any other alternatives, and which are also consistent with the Belfast/Good Friday Agreement."

The UK and the EU were able to agree these underlying principles in theory: The difficulty has come in upholding seemingly contradictory principles, as the Protocol has become a reality. The upshot has been economic disruption and further political division, which has contributed to community unrest.

This has undermined the advantages of dual access to the UK and EU markets that the negotiators sought to preserve. It has also led in turn to a breakdown in trust between London, Brussels, Belfast and Dublin

The Committee took evidence from business, academic, political and community interests from across Northern Ireland, Great Britain and the European Commission.

Michael Jay, who chairs the House of Lords committee set up to examine the controversial post-Brexit trading arrangements, said there was an urgent need for compromise.

"That won't be easy, but it is an absolute necessity that the UK and the EU should now work together urgently to identify solutions if Northern Ireland is not to become a permanent casualty of the Brexit process," he said.

"The tensions over the protocol currently seem insoluble. Yet that was also true of the political situation during the Troubles. But the peace process ultimately took root and flourished, through a process of time, patience, dialogue, and most of all trust. Those same qualities are now needed to address the problems that Brexit and the protocol present."

In an interview, Mr Jay added: "If there is no resolution, if it just festers, it seems to me it will become a constant irritant in the relationship between the EU and the UK and it will become an irritant within the island of Ireland, between north and south.

Speaking on RTÉ's Morning Ireland programme, Mr Jay said the protocol needs to be looked at again, with amendments needed, as businesses exporting to Northern Ireland are experiencing real difficulties.

The EU and the British government needs to take a good hard look at the protocol and find some ways of mitigating these difficulties, he said.

"Good will and trust and good constructive negotiation between the two parties with a real commitment to come to an agreement is what we need."