European Council President Donald Tusk has said he is ready to hold "serious talks" with British Prime Minister Boris Johnson but he said he will not co-operate on is a no-deal Brexit.

The two leaders will meet on the fringes of the G7 summit in Biarritz tomorrow.

Mr Tusk, speaking ahead of the G7 summit, said that Mr Johnson "will be the third British Conservative prime minister with whom I will discuss Brexit.

"The EU was always open to co-operation when David Cameron wanted to avoid Brexit, when Theresa May wanted to avoid a no-deal Brexit and we will also be ready now to hold serious talks with Prime Minister Johnson.

"One thing I will not co-operate on is no deal. I still hope that Prime Minster Johnson will not like to go down in history as 'Mr No-Deal'.

"We are willing to listen to ideas that are operational, realistic and acceptable to all member states including Ireland, if and when the UK government is ready to put them on the table."

Tomorrow I meet PM @BorisJohnson. I hope that he will not like to go down in history as "Mr. No Deal". The EU is ready to listen to operational, realistic ideas acceptable to all Member States including Ireland, if and when the UK government is ready to put them on the table.

But speaking on the plane to Biarritz, British Prime Minister shot back at the EU Council's President by suggesting that failure to reach a Brexit agreement would also reflect badly on Mr Tusk.

"I have made it absolutely clear I don't want a no-deal Brexit," Mr Johnson told reporters.

"But I say to our friends in the EU if they don't want a no-deal Brexit then we have got to get rid of the backstop from the treaty. 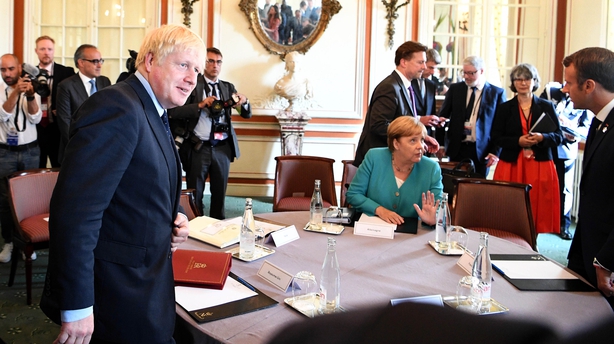 "If Donald Tusk doesn't want to go down as 'Mr no-deal Brexit' then I hope that point will be borne in mind by him too."

The gathering in the French resort marks Mr Johnson's debut on the world stage, and he will also have a highly-anticipated first meeting with US President Donald Trump, where they are expected to discuss a potential post-Brexit trade deal.

Mr Johnson said the gathering of leaders from the UK, US, France, Germany, Italy, Canada and Japan was not a "wonderful boondoggle at some posh hotel", but a chance to improve the lives of people around the world.

The UK is due to leave the EU on 31 October and Mr Johnson has promised to deliver Brexit by then, with or without a deal, "do or die".