The Minister for Finance has said that the UK staying in the Customs Union would be enormously positive from an Irish perspective.

Paschal Donohoe was speaking in Washington, where he is attending the annual Spring Meetings at the International Monetary Fund.

Minister Donohoe took part in a public discussion on the topic of ‘Investing in People and Infrastructure’ and appeared on stage alongside the IMF Managing Director Christine Lagarde.

Speaking to RTÉ News after the event, Minister Donohoe said: "Any movement that the United Kingdom were to make towards some form of Customs Union or staying in the Customs Union would be enormously positive from our point of view."

The Finance Minister said, however, that this would not address all of Ireland’s concerns.

"It wouldn’t deal with all of the issues we would have in avoiding hard infrastructure on the border between Ireland and Northern Ireland which is why the backstop agreement and continued engagement between the EU and UK is so important," he said.

EU countries could get 'fed up'

Earlier, John Bruton has said that Ireland should be "very worried" about other EU countries getting fed up and wanting the UK out of the EU as soon as possible.

Speaking on RTÉ’s 'The Week in Politics', the former taoiseach said that there was a "perception among many European countries that any time Britain gets a concession it pockets it and goes on making its next request. 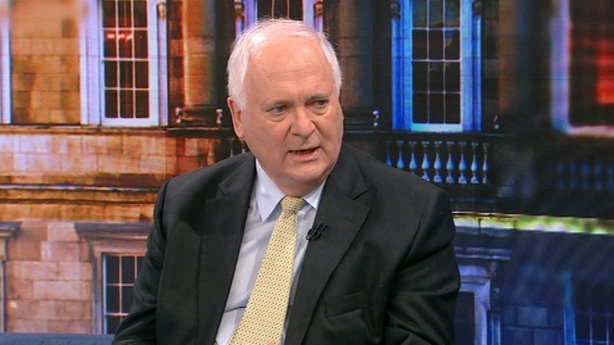 "They were exempted from the Euro, exempted from justice and home affairs. They got a deal in relation to social welfare rights for immigrants," he said.

Mr Bruton said it was most likely that Britain would leave the bloc and if that happens, it must be kept in close association with the EU.

He said that this could be done through something like a European Customs Association, in which the UK would be consulted by the EU in regard to trade policy.

Mr Bruton said creative ideas like that need to be supported so Britain is not isolated.

He also said the last thing that Ireland wants to see is a British government led by someone who adopts a very anti-EU line.

"And Ireland then becomes front line in a global struggle and that is never a comfortable place to be."

The former taoiseach said there is a fear in other European countries that Britain in the EU "will never ever settle down".

He also said that Ireland must do everything "to fight against the view that the EU would be better with Britain gone".

Ghislaine Maxwell: From socialite to incarceration