British cabinet ministers appeared at odds over whether the UK could secure a unilateral exit from a Brexit backstop deal on Northern Irish border arrangements.

Education Secretary Damian Hinds said such an outcome would be "very, very unlikely", while Commons Leader Andrea Leadsom insisted the UK must be able to leave any customs agreement.

Mr Hinds told BBC1's The Andrew Marr Show a solution to the issue needed to be negotiated.

He said: "If you have too hard a line about saying, 'well we must just have a totally unilateral exit, or there's an absolutely fixed, hard end date', that is... very, very unlikely that is going to be negotiable with the other side.

"On the other hand, people here rightly want comfort and they should be able to have comfort and confidence that it isn't an open-ended thing."

Mrs Leadsom insisted the UK "cannot be held against its will" in a backstop customs arrangement with the EU, and claimed MPs would not support a scenario in which Britain could not decide when to leave.

"Frankly, it's because that would be to then fail to fulfil on the will of the people expressed at the referendum and I very much doubt we'd get it through Parliament," she said.

Read more:
May risks Brexit row with DUP over 'Irish Sea border'
Jo Johnson resigns as UK Transport Secretary over Brexit
Analysis: Theresa May, the Backstop and the DUP

In a direct message to Prime Minister Theresa May, shadow foreign secretary Emily Thornberry told the BBC: "You cannot simply come to the House of Commons with a bit of nonsense that makes no sense.

"You cannot expect the Labour Party to save you from your own backbenchers who are saying this deal makes no sense - and everybody knows it doesn't make sense."

The comments came after hardline Tory Brexiteers and the DUP joined forces to warn they are prepared to vote down Mrs May's EU withdrawal plans. 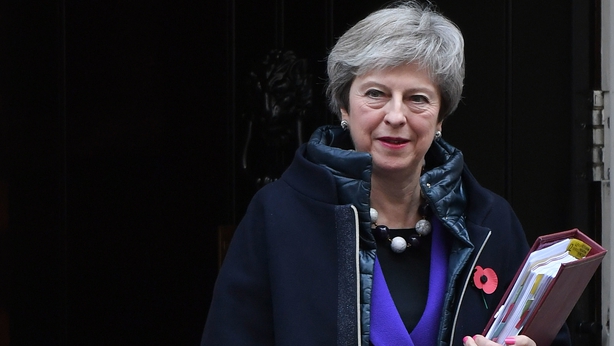 In a stark warning to the PM, Tory Brexiteer Steve Baker, deputy chairman of the 80-member European Research Group (ERG) of Conservative backbenchers, and the DUP's Brexit spokesman, Sammy Wilson, said they would oppose any agreement which they thought threatened the union of the UK and could put a trade border down the Irish Sea.

Writing in The Sunday Telegraph, they said: "We share the Prime Minister's ambition for an EU free trade agreement, but not at any price, and certainly not at the price of our union.

"If the Government makes the historic mistake of prioritising placating the EU over establishing an independent and whole UK, then, regrettably, we must vote against the deal."

With the shock resignation of pro-Europe transport minister Jo Johnson continuing to cause ructions in Tory ranks, Mrs May is running out of time to seal an EU exit agreement.

Hope of getting the Cabinet to sign off on Brexit deal proposals this week appeared to be rapidly receding, as it was reported the EU had rejected London's plans for an independent arbitration clause that could allow the UK to quit a backstop deal on the Northern Ireland border.

In the wake of Mr Johnson's resignation, there have been reports that other ministers are considering quitting over Brexit.

Brexiteers have insisted that the UK should not get involved with a potentially permanent backstop customs union agreement with the EU as the price of avoiding a hard border in Northern Ireland.

Meanwhile, Tory 'Remainers' should "stick to their guns" ahead of any crucial vote in parliament on the Prime Minister's Brexit deal, a senior Labour MP has said.

Rachel Reeves, chairwoman of the Business, Energy and Industrial Strategy Committee, warned the choice between Theresa May's Chequers plan and a no-deal Brexit was a "false choice", adding that jobs and investment "will flow out of this country" if Britain does not remain in the single market and customs union.

Her comments came as Mrs May potentially faces a knife-edge vote in the Commons on any Brexit deal she finalises with the European Union in the coming weeks.