Diggy and Burns boarded the Enterprise train in Dublin one recent weekday morning. The word 'legends' doesn’t come close to describing the pair making a nostalgic return to Belfast.

Mike Burns is a native of Co Roscommon. Sean ‘Diggy’ Duignan is from Galway. Long before there was a break-in at the Democratic Party’s offices in the Washington’s Watergate Building, Duignan and Burns were an Irish version of Woodward and Bernstein.

They joined RTÉ in the 1960s. Soon they were covering the Paris student riots, led by Danny The Red/ Dany Le Rouge (Daniel Cohn-Bendit). They witnessed the drama at the Republican and Democrat 1968 conventions, which features in the Norman Mailer book, 'Miami and the Siege of Chicago'.

On one of their first transatlantic trips, they met an influential US television executive who began telling them how satellites were going to revolutionise the news business. Duignan reached into his pocket and pulled out his secret weapon, a 3.5 mini jack, joined by a wire to two of what were known as crocodile clips. It was the device he used to send radio interviews from his tape recorder, through the clips attached to the mouthpiece of a telephone.

Burns and Duignan had many talents, presence among them, but their greatest gift was charm. To this day Burns has a boyishness about him - John Boy Walton meets Tom Sawyer and Huckleberry Finn. Duignan was born with film star good looks - a Clark Gable or Johnny Depp type. In his formative years he trained at Galway's famous Taibhearc theatre and, waking or sleeping, he would always be on stage. An important part of his story is the television camera loves him.

Their journey north on the Enterprise train was driven by the desire to revisit places they had first seen 50 years before. They were among the small group of RTÉ reporters who regularly came North during the early years of The Troubles. They worked with cameramen like Gay O'Brien, Bill St Leger and Jackie Merrieman, and sound recordists like Eamon Hayes, Fintan Ryan and Alan Seavers. 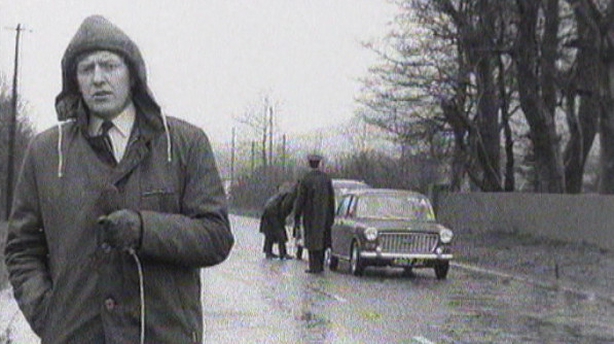 RTÉ's extensive archives has a report by Burns, standing tall on the border, the hood of his anorak raised to protect him from the rain as he reports on police roadblocks to coincide with the 50th anniversary of the 1916 Rising.

The archives also house an extraordinary piece of Duignan analysis, straight down the lens, each word perfectly chosen and delivered, during which he predicts the downfall of Captain Terence O'Neill and the emergence of Brian Faulkner as his successor. 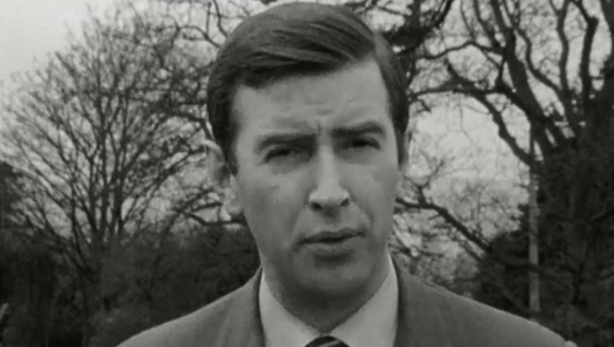 On that recent autumn afternoon, in the company of their pal, now retired former Oireachtas staff member, Eoin Faherty, the pair lunched in the first-floor dining room of Stormont. They walked along the marble corridors and viewed the portraits of former interviewees - Ian Paisley, Martin McGuinness, David Trimble, Seamus Mallon.

They bemoaned the absence of elected representatives and the Stormont stalemate on course to reach the two-year mark. And then Duignan decided that it would be wrong to return to Dublin on the Enterprise Train without visiting one of the world's finest porter houses - The Crown Bar.

An American family from Iowa was sharing the snug with them when halfway into the first pint, Duignan and Burns dug up clear-as-a-bell recall of an incident that happened 50 years before.

Rioters had been attacked during a civil rights march and RTÉ agreed to have a selection of them brought by taxi from Co Derry to Donnybrook to tell their story. The group crowded into a studio where, live on air, they would be asked to gave their account of what had happened to them. Another participant in the general discussion was the Co Donegal-born socialist and writer, Peadar O’Donnell, then in his 70s.

It was almost an entirely male gathering but before the programme ended, a waif-like young woman spoke. As Mike Burns tells it, her contribution electrified the studio and O'Donnell said to him afterwards, "she is one for the future". Her name - Bernadette Devlin.

On Friday night last at HomePlace, the centre in Bellaghy that honours Nobel Laureate Seamus Heaney, I remembered that Burns and Duignan story about Bernadette Devlin.  Now 71, she electrified a theatre packed with 200 people, myself among them. 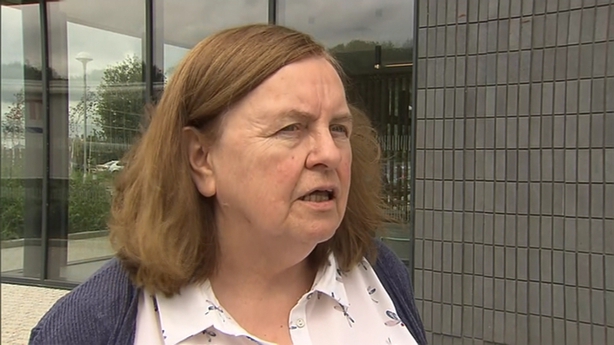 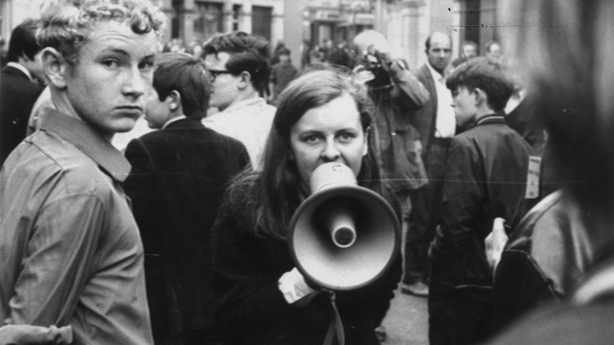 The event was an occasion to mark Mid Ulster's contribution to the Civil Rights campaign, making the links to Derry's Duke Street March of 5 October 1968, but also to happenings and pockets of people in places like Maghera, Magherafelt, Bellaghy, Burntollet and Dungiven.

The organisers were three pals, Martin Kearney, Peter Etherson and Hugh Logue. What they put together had the feel of an old-fashioned variety concert.

The programme featured poetry, song, a 15-minute film with footage of the early Civil Rights marches and a panel discussion. It was chaired by Professor Paul Arthur and featured Marian Donnelly, the first secretary of the South Derry Civil Rights Association and a former President of the Workers Party of Ireland.

Hugh Logue is the owner of two stitches acquired during the Civil Rights Burntollet march in January 1969, an SDLP member of the 1974 Assembly and a member of the Irish Commission for Justice and Peace that sought to resolve the 1981 IRA Hunger Strike. Bernadette Devlin was the third member.

A choir travelled by bus from the all-girls school, Dominican College, Fortwilliam in North Belfast. They sang Bob Dylan songs 'The Times They Are A Changing', 'Blowing In The Wind' and 'Forever Young'.

For their contribution to close the night they were joined by Belfast-born opera singer Angela Feeney. She had returned from her home in Munich to take part in the concert. She and the choir sang 'We Shall Overcome'. By the second stanza the audience was on its feet, linking hands and singing.

A striking feature of the night was Bernadette  Devlin's capacity to engage with the young choir members, among them one of her grandchildren.

It is 49 years since the publication of her book 'The Price of My Soul'. In 1969, as a 21-year-old, she won a Mid Ulster by-election and became the youngest ever member of the Westminster parliament. 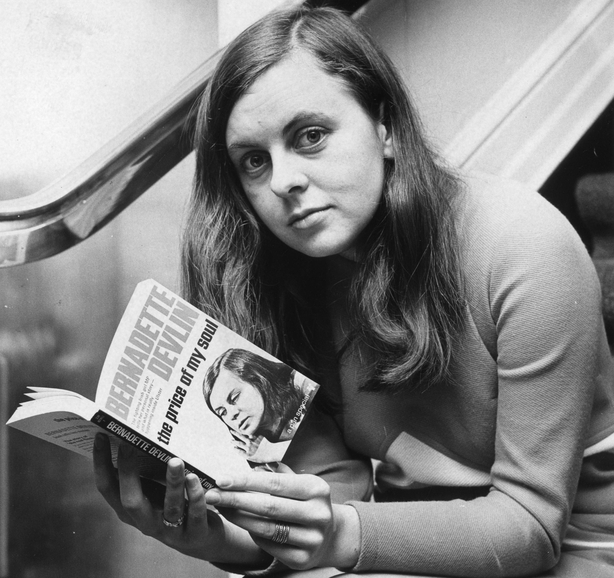 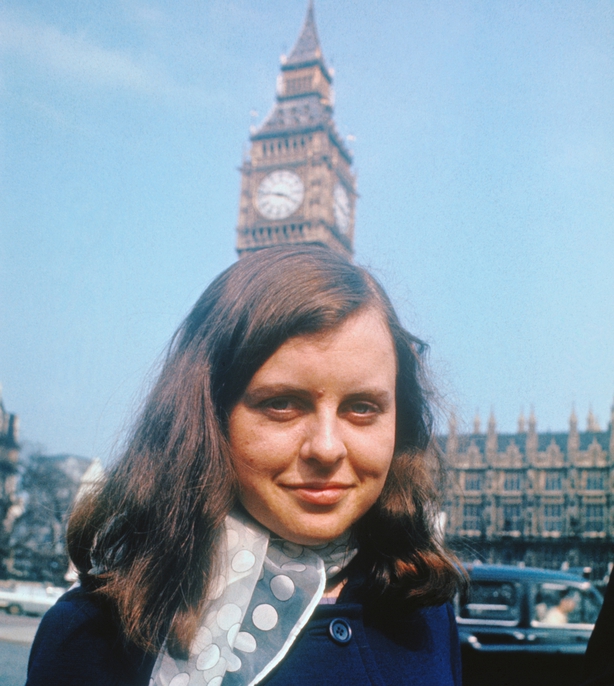 In January 1971, she was in Derry's Bogside and witnessed the actions of the British Paratroop regiment. The Speaker in the House of Commons thwarted her attempts to speak. After the then Home Secretary, Reginald Maulding, stated that British soldiers had fired in self-defence, she walked across the floor of the House of Commons and slapped him in the face.

In 1981, loyalist gunmen broke into her home near Coalisland and tried to kill her and husband, Michael McAliskey. They shot her 14 times in front of her children but she survived.

Nowadays, she gives a lot of energy to working with an organisation called STEP (the South Tyrone Empowerment Programme) based in Dungannon. It works with groups including migrants, single parents, Travellers and people with intellectual disabilities.

She turned 71 in August, she has seven grandchildren and she retains the gift to command attention when she speaks.

"At the time just after 1972, when Bloody Sunday frightened the British government about where we were going, the peace agreement effectively put on the table then, the papers put forward, there was nothing new in the agreement we signed in 1998."
Bernadette McAliskey on the wasted years

"The peace process was designed for the middle ground of nationalism and the middle ground of unionism to co-operate and hold the middle ground – it was not a peace treaty, a peace agreement. It was a conflict management agreement until you might get to the point of conflict resolution. What was not predicted by the people who drew it up was that the centre wouldn’t hold or more correctly, how willing the people on the edges were, how anxious they were, to be in the middle. So when the DUP and Sinn Féin became the implementers, the basis on which the agreement was put together didn’t hold that ideological intransigence of the two."
Bernadette McAliskey  on the 1998 Good Friday Agreement

"What is important for all you young people and for all the rest of us is to learn that militarism and war take us nowhere but back to the table we walk away from before it starts."
Bernadette McAliskey on the role and the futility of violence

Veterans of the SDLP, contemporaries of John Hume and Seamus Mallon, the likes of Alasdair McDonnell, Sean Farren and Denis Haughey, were sprinkled throughout the audience at the Bellaghy event. They may well be struggling to stay optimistic these days because the argument grows that the only survival route for their party is to enter a relationship with Fianna Fáil.

It's a hard, even an impossible swallow for some, but it is shaped by the lack of finance, resources and personnel of an organisation that no longer has seats in Westminster.

But such is the growing impact of Brexit and the behaviour of its authors that the SLDP may have at least one unexpected phase of life left. Were the turmoil within the Conservative party and the jockeying in the House of Commons to trigger a Westminster election, there could well be an attractiveness in the option of SDLP candidates who would take their seat and provide a voice for the 56% of Northern Ireland voters who are  keen to remain in the European Union.

Much of the retrospection these days is, for obvious reasons, linked to the 1998 Good Friday Agreement and the Duke Street 5 October 1968 Civil Rights March. But another pattern, from an earlier time, is also worth noting.

The 1914-1918 Great War is an example of when big picture events collided with and eclipsed smaller, less significant but deeply sensitive affairs.

Before the outbreak of World War I, members of the Ulster Volunteer force had imported guns and signed the Ulster Covenant; the Irish Volunteers too were organising and in the market for weapons and the British government was agonising about how it might address the growing tension and deal with "the Irish question". That tense dynamic was interrupted and altered by the outbreak of war on mainland Europe.

100 years later, the 'local' was in an imperfect but better place. Within Northern Ireland, the centuries old orange-green tension had not subsided but the arguments were being conducted through politics. North-South relationships had reached a "live and let live next door neighbour status" and familiarity was actually breeding a contentment.

The  British-Irish relationship was in its healthiest position for not just decades but centuries. The shared European connections, from the graveyards of Messines to the political gatherings in Brussels, were part of that evolving, stable chemistry. 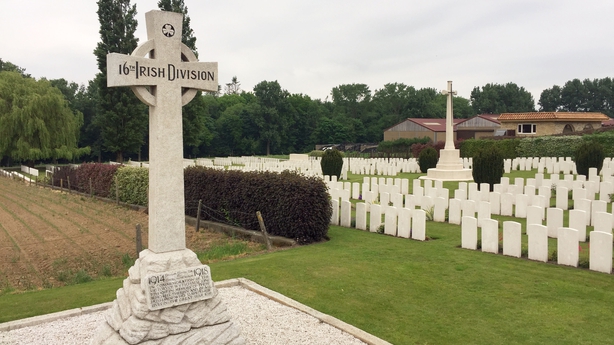 But as happened a century before, big picture events have interrupted and threaten to eclipse and alter. In this instance, the driving force is a section of Britain’s Conservative party who no longer want to be part of the political structure that has evolved in post-war Europe and who have a hankering to return to a time when Britain was a more powerful political and economic force.

That big picture ploy may well involve the unreasonable pursuing the unreachable. But, in a way, those responsible may not have envisaged, may not comprehend and, in some cases are not overly bothered about, on the island of Ireland they have caused instability and damage.

On Friday night last, in Bellaghy's HomePlace, the depth of disappointment was palpable. As it was with that young girl in a Dublin studio 50 years ago, for her and for her audience, the interest in fairness remains.