At first glance, it is among the Dáil's most solemn tasks.

The act of voting on legislation, when TDs gather in response to the division bells sounding around Leinster House.

However, in the minutes before the formal voting process begins, TDs from all sides often approach ministers.

The atmosphere is typically relaxed and the mood often bordering on the jovial.

Frequently the chatter in the chamber is loud but the proverbial "quiet word" is spoken too, as TDs briefly raise matters with those in power, through this less official channel.

If the listening ears of ministers were open to all approaches up until now, that could change in the months ahead. 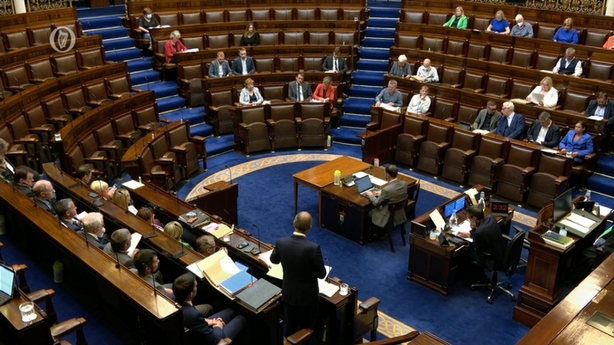 Against the backdrop of a divisive confidence motion taken earlier this month, one figure on the Government side summed up the change of mood in rather undiplomatic terms.

"If someone crosses the floor before a vote to talk to a minister having recently tried to vote that same minister out of office, well I think the reaction will be, 'f*** you.'"

Most will probably desist from using such unparliamentary language even if the sentiment is accurate.

These strong feelings neatly illustrate too just how influential those who supported the Government in the confidence motion could be over the next two years.

It is all in marked contrast to when the Government was formed. Then the role of Independent TDs backing the new administration looked largely inconsequential given the coalition's clear majority.

Earlier this month though, the Dáil arithmetic was fundamentally altered, and the nailed-down majority was shaved away.

The Sinn Féin confidence motion then sought to test the foundations of the three-party Government.

In the end, the result was conclusive when the motion was defeated on a margin of 85 votes to 66.

The voting strength of the Independent TDs was crucial in delivering a decisive result in the Government's favour.

As the political system now braces itself for a disorderly autumn and winter period, already work is under way to solidify that support from the Independent benches.

Denis Naughten (Galway-Roscommon) could also have a significant part to play, but he is at times more inclined to vote against the Government.

There are also those who began life in the 33rd Dáil within the Government parties but now find themselves outside their parliamentary party after failing to vote with the coalition in the past year.

The support of Fine Gael TD Joe McHugh, Green Party TDs Neasa Hourigan and Patrick Costello, and Marc MacSharry, who resigned from Fianna Fáil last year, was an essential component in the Government's strategy to defeat the Sinn Féin motion.

Indeed, former Fianna Fáil TD MacSharry was quick to reveal just what he delivered for his constituency in exchange for his vote.

In a succinct tweet he wrote: "Cardiology solution for Sligo University Hospital secured and Co Sligo inclusion in Mica scheme assured - the price of support for inclusion in tonight's vote!"

The Taoiseach later confirmed that the Government had "engaged" with Mr MacSharry on these issues, but pointed out that the Sligo-Leitrim TD had publicly pledged support to the coalition before the discussions reached a conclusion.

While Mr MacSharry's approach - in clearly identifying constituency issues in need of remedy in exchange for support - was once part of the modus operandi of Independent TDs, this has changed over the years.

Many are now coyer about what exactly their support delivers for the constituency.

Some are no doubt mindful of the Cromane Pier problem, the flagship project in the late Jackie Healy-Rae's 1997 deal with the Fianna Fáil-led Government.

But for a variety of complex reasons, that pier is still not built.

Claims too that the sole influence of an Independent TD catapults a constituency issue over the line are always furiously contested by Government TDs.

One veteran Independent TD observed that "you're on a loser when you start talking about this stuff in public".

The real currency then it seems is the access to Government Buildings and to Ministers afforded to Independent TDs supporting Government.

Michael Lowry and Seán Canney held individual discussions with both the offices of the Taoiseach and the Tánaiste before backing the Government in the confidence vote.

"It is hard to know. Government still has plenty of support from the TDs outside the parliamentary parties. But I think they will pay a bit more attention to what we're saying"

Cathal Berry was also in ongoing discussions with those at the helm in advance of the decision to increase spending on the defence forces.

All the talks had a strong focus on the budget and one-off measures that will seek to alleviate some of the worst effects of the cost-of-living crisis.

Michael Lowry also placed a strong emphasis on the concerns of farmers when it comes to carbon emissions targets.

Independent TDs, who are in the loop with Government, get access to briefing documents and receive information about constituency issues at the same time as the Fianna Fáil, Fine Gael and Green Party TDs.

It is enough to keep Independent Louth TD Peter Fitzpatrick in "regular contact" with Government, and he believes his support will be needed more than ever in the second half of the coalition's five-year term.

On that very point, Denis Naughten, a fellow former Fine Gael TD, is not certain but he does believe the Independents will be closely listened to.

"It is hard to know. Government still has plenty of support from the TDs outside the parliamentary parties. But I think they will pay a bit more attention to what we're saying," he said.

One thing that Sean Canney will be saying is that there is a need for more balanced regional development.

He believes that the development of wastewater treatment plants in towns in his constituency are central to allowing more people live and work in East Galway.

Specifically, he wants a municipal wastewater treatment plant for Craughwell, Corofin and Abbeyknockmoy.

These projects are likely to come to the fore again in December, when the Government will intensify contact with some Independents prior to the vote that would see Leo Varadkar replace Micheál Martin as Taoiseach.

"There will be horse trading around that time. That is the way it has always been, but they are good to deal with. Much easier than the Independent Alliance in the last Government," was how one influential Government figure described this loose alliance.

Indeed, there are some on the coalition backbenches who this weekend looked at their less-than-ideal seats in Croke Park for the All-Ireland football final, and quipped that maybe they should invoke the help of the Independent TDs to get a better viewing perch.

They were joking, but only half-joking.