The President of Ireland is guaranteed an exalted, if not rarefied, position under our Constitution.

Consider Article 12:1. It states that Uachtarán na hÉireann is the person "who shall take precedence over all other persons in the State".

Sounds impressive, doesn't it? Until you read the succeeding articles, which are all about hemming in the power of the first citizen.

For example, Article 12:9 states that s/he "shall not leave the State during his term of office save with the consent of the Government".

This week, however, it was all about the freedom of the President to speak his mind - particularly when it can be interpreted as a direct critique of Government policy.

It prompted an equally juicy question for the Oireachtas: Just how far can politicians go when they want to criticise a President?

The Constitution isn't much help, as there is no bar on the President expressing a view, albeit there's a decades-long convention that the office is above politics.

In a nutshell, there are boundaries ... but they're not defined. 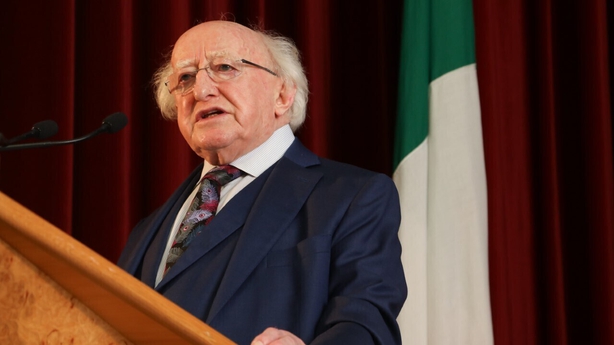 The Áras must, therefore, decide how far to go into the political realm and the Government must make a calculation on whether to push back.

Ceann Comhairle Seán Ó Fearghaíl was very clear about what could and could not be said in the Dáil chamber about President Higgins's views on housing.

It was a valiant effort to uphold the rules of the House.

Yet it was only partially effective inside the chamber and the Ceann Comhairle's authority evaporates once the deputies exit Leinster House.

All the indications so far from this Government are that they won't go on the attack.

President Higgins has on several occasions spoken about the housing crisis, and so another shot across the Government's bows wouldn't have been all that controversial.

What gave his speech at Jigginstown Manor, outside Naas, extra heft was that by using the word "disaster" to describe housing in Ireland was perceived as effectively having endorsed the position of the Opposition.

"It isn't a crisis anymore - it is a disaster."

Whether he meant to, or not, only the President knows.

The "d-word" within minutes had become the lead story on radio and TV bulletins and frontpage news the next morning.

It irked senior Government figures no end, just as it felt like manna from heaven for Sinn Féin, Labour, the Social Democrats and People Before Profit/Solidarity.

Whether President Higgins had stepped over the invisible diplomatic line or not, significant caution was the unstated response of the Government.

That was clearly in evidence when the Taoiseach spoke in Cork the following day and conducted a three-stage defence.

Micheál Martin began by stating that he would not engage in any debate on what the President said, on any matter, due to "noble" precedent and tradition - so no diplomatic row.

The Taoiseach then said he had already described housing as the greatest social crisis facing our country - indicating the Government recognises the scale of the problem.

And he finished up by suggesting that the Government's Housing For All policy was going to resolve the crisis by dramatically increasing supply.

On that last point, it's most certainly one of the key tests on which this Government will ultimately be judged.

One very good reason for the Government not commencing a war of words with the President of Ireland is his extremely high popularity rating among the general public.

In the 2018 Presidential election, President Michael D Higgins secured a whopping 55.8% of the first-preference votes from an electorate which knew very well what he stood for.

In the 2011 Presidential election, he had amassed more than a million votes by the fourth and final count.

Another good reason is that the President has a keen political judgement, carefully honed from decades of experience as a TD and Senator as well as serving as a Labour Party minister in Cabinet.

It would therefore be a very brave Taoiseach who would take on a popular and wily President, on the nebulous question of precedent, when the issue he's talking about - housing - is one on which the Government is very much on the back foot.

But what will happen if the President repeats his criticism, and goes further in his trenchant analysis on this or another topic?

One very good reason for the Government not commencing a war of words with the President of Ireland is his extremely high popularity rating among the general public.

Tánaiste Leo Varadkar seemed to indicate this week that the President has carte blanche to say what he wants and when he wants to.

Mr Varadkar told Newstalk that President Higgins was both above politics and beyond criticism.

Now that really is a rarefied position to be in, and the Government seems happy to live with the consequences.

The truth is that this week's hullabaloo was simply not of a scale which demanded that the three-party Coalition roll their tanks onto the Áras lawns.

If you're looking for an example of a real bust-up, consider what transpired between President Mary Robinson and Albert Reynolds' government back in 1993.

She had decided, in a private capacity, to travel to west Belfast and meet community leaders there - including then Sinn Féin leader Gerry Adams.

We need your consent to load this rte-player contentWe use rte-player to manage extra content that can set cookies on your device and collect data about your activity. Please review their details and accept them to load the content.Manage Preferences
An RTÉ News report by David Davin-Power broadcast on 12 September 1996.

British Secretary of State Patrick Mathew sent a rocket of a memo contending that the trip would have the "inevitable effect of exacerbating threats in security there. It would have a very serious and prejudicial impact on Unionist opinion".

Then taoiseach Albert Reynolds sent the memo to the President with a letter stating:: "... the [Irish] government feel that you may wish to reconsider the advisability of your planned visit".

President Robinson did consider both letters, and then decided to go anyway.

The fact that it was a private visit, rather than an official one, meant that the government couldn't compel her to remain at the Áras, as per Article 12:9.

This week's tension between the President and the Taoiseach pales in comparison with the Constitutional crisis triggered by defence minister Paddy Donegan in 1976.

Donegan labelled Ireland's fifth president, Cearbhall Ó Dálaigh, a "thundering disgrace", or reputedly far worse, for referring a bill to the Supreme Court even though he was constitutionally entitled to.

The Donegan comments triggered a series of events which led to Mr Ó Dálaigh's resignation.

But back to the current spat.

If this Government had been up for a fight with President Higgins, they could have zoned in on his economic analysis rather than his use of the "d-word".

According to the Central Statistics Office, of 20,400 housing units completed last year 62% went to households, 25% went to social housing stock; and only 13% went to other sectors such as institutional buyers.

Could it be argued that this is not a President speaking on behalf of the people as a whole, but rather a partisan political analysis from a former politician on the left?

Contrast that with the President's comments that the basic needs of society "should never have been left to the marketplace" and that "it is the mad speculative money that is destroying our country, which we are welcoming which we shouldn't be".

Could it be argued that this is not a President speaking on behalf of the people as a whole, but rather a partisan political analysis from a former politician on the left?

Then again, maybe the less risky approach for the Government would be to avoid going head-to-head on housing altogether and, instead, attempt to constrain the President under the powers of the Constitution if something new blows up.

For example, Article 13.9 states: "The powers and functions conferred on the President by this Constitution shall be exercisable and performable by him only on the advice of the government..." [Emphasis mine]

All the indications so far from this Government are that they won't go on the attack.

It seems that engaging in a war of words with President Higgins is just not worth the risk - something the President himself may well have calculated.